Competition for the best budget hotel heats up

Competition for the best budget hotel heats up

Anyone curious about the latest trend in the hospitality industry need only take a quick stroll through the tourist-thronged streets of Myeong-dong and look up.

These days, it’s just one branded budget hotel after another.

There’s the Loisir Hotel right by exit 5 of Myeong-dong Station. Just steps from exit 8 stands the Nine Tree Hotel, and a five-minute walk will lead straight to the Ibis Styles Ambassador or the Solaria Nishitetsu Hotel.

All of these hotels flung open their doors in the past three years to serve the growing number of cost-conscious locals and tourists.

But Myeong-dong is only part of the story, as affordable accommodations have sprung up around the capital city and beyond.

This year alone, 55 new business hotels will open in Seoul.

The reason for the popularity of budget hotels is obvious: customers can stay there for a night for the same price as a couple of drinks at a five-star option.

Major local operators Lotte and Shilla and Starwood Hotels & Resorts Worldwide have been vying to win more customers by launching low-cost chains. But as the competition heats up, the business hotels are striving to outdo one another with their services.

Aloft Seoul Gangnam is banking on offerings tailored for the young, trendy and tech savvy. The hotel offers a smartphone-enabled check-in system, and the SPG Keyless system allows guests to unlock their hotel rooms with a simple wave of their smartphone.

“The system can provide a unique experience for guests, as it enables them to bypass the front desk and avoid waiting in line,” said Ahn Seok-chan, a general manager of Aloft Gangnam.

Another attraction for younger visitors is music. The hotel offers the live performance series “Live at Aloft Hotels,” where up-and-coming artists perform at the hotel’s branches across the world.

The focus of the Ibis Styles Ambassador in Myeong-dong is reflected in its name. The accommodation distinguishes itself with its upmarket interior, design and decoration, which includes pictures themed around classic movies and the film industry.

Accor-Ambassador Korea, a French-Korean hotel management venture, hopes its trendy design will appeal to younger leisure and business travelers looking for an affordable but stylish place to stay.

“This new hotel combines colorful decoration, full hotel services and a fantastic location, making it a smart choice for both domestic and international travelers looking for a trendy hotel in Seoul’s famous Myeong-dong district,” said Cho Min-sook, a general manager of the Ibis Styles.

The hotel’s food and beverage outlets also boast artsy decorations, while the hotel’s rooftop Le Style Bar on the 21st floor sells drinks, cocktails and light snacks alongside a panoramic view of the skyline and the surrounding hills.

Situated between Myeong-dong and Chungmuro stations, the property includes 180 guest rooms, the bar and restaurants.

The hospitality group opened the hotel in March and will open an additional Ibis Ambassador Hotel in 2016 near the Styles.

Also competing in the Myeong-dong area is the Crown Park Hotel. The notable characteristics of the hotel are the eco-friendly materials used in the construction. With 204 guest rooms, the hotel is a one-minute walk from the neighborhood’s popular tourist destinations, such as Lotte Department Store. The hotel also offers meeting rooms and business-related services like printing and sending faxes around the clock. 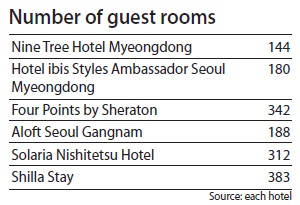 “Located near popular tourist attractions, we will serve tourists and business travelers by offering services at affordable prices,” said Kim In-soo, a general manager of the Crown Park Hotel.

Shinsegae Group has also thrown its hat in the ring by opening its first budget property in the Namsan area in May.

Four Points is aimed at boosting convenience and accessibility by providing complimentary shuttle services to a number of popular tourist destinations in the City Hall, Myeong-dong and Gwanghwamun areas in central Seoul.

The budget hotel’s target clientele are individuals traveling for pleasure or business to Seoul and nearby cities.

The shuttle service is mainly designed for tourists who go sightseeing in Seoul, which are the hotel’s most common clientele.

The number of foreign tourists visiting Korea topped 14 million for the first time this year, backed by a sharp rise in Chinese travelers, according to the Ministry of Culture, Sports and Tourism.

“The K-pop boom continues to draw in tourists in droves, but there are not enough places to serve them,” the president said last month.

The ruling Saenuri Party and the administration are pushing for a bill to relax regulations on the construction of accommodations.

“If we miss this opportunity, it will be something we regret years later,” she added.

Still, some are contesting the president’s statement, pointing to the high vacancy rate at many hotels in Seoul.

Whatever the case, hotels aren’t slowing down their construction. Four Points recently opened a basement level connected to Seoul Station, saying that the hotel is focused on being at the ideal location for moving around the city and country.

While multinational operators are using their well-known brands to attract customers, leading local chain Hotel Shilla is aiming to do the same in the budget sector.

Hotel Shilla is betting big on its affordable brand, Shilla Stay. Since first opening in 2013, the budget hotel now has six branches across the country, encompassing Ulsan, South Gyeongsang and Jeju Island, as well as Seoul and Gyeonggi. Shilla Stay will open in more regions across the country by 2016, including in Seocho District, southern Seoul.

The latest branch is in Mapo District, western Seoul, in a move that directly competes with a nearby business hotel operated by archrival Lotte Hotels and Resorts.

Located near Gongdeok Station, Shilla Stay Mapo has 383 rooms, along with amenities such as a bar, fitness center and meeting centers.

One selling point is the bedding, which the operator says is comparable to that used in five-star hotels.

The location of the hotel will also likely appeal to business travelers as it is near Gongdeok Station, which serves Seoul Subway Line 5, Line 6, Gyeongui Line and the Airport Railroad Express line that travels from Incheon International Airport to Seoul Station.

The district is also close to major business districts such as Yeouido and downtown areas like the hip Hongik University neighborhood.

With 245 guest rooms, L7 will be equipped with a rooftop bar and different amenity facilities.

Parnas Hotel opened its Nine Tree Hotel in Myeong-dong in 2012 and is specializing in spa treatments for its guests.

It offers rooms with foot massagers and face masks, and offers nine kinds of pillows that include things like herbs to invigorate or calm. There are also rooms for three people, unlike most high-end hotels. In the community room, there are massage chairs and a bulletin board where guests can exchange information.

The promising prospects of budget hotels have even drawn companies that have never before entered the hospitality industry.

Daelim Group, a construction and petrochemical conglomerate, is expanding its hotel business, as its construction affiliate Daelim Industrial has been suffering from sluggish sales growth due to unfavorable economic conditions at home and abroad.

Daelim opened its first business hotel, called Glad Hotel, near the National Assembly in Yeouido, western Seoul, saying that it is aiming to become the nation’s third-largest hotel and resort operator after Lotte and Shilla.

Glad Hotel has no auxiliary luxury facilities such as banquet halls or swimming pools, instead prioritizing affordability and convenient locations.

The group expects its geographic location to be profitable, as the financial district houses fewer budget hotels, which translates to lower competition compared to areas like Myeong-dong and Gangnam District.

Daelim Industrial created the blueprint for the project, and Daelim’s subsidiary unit Samho did the construction. Ora Resort will manage the hotel chain due to its experience running the five-star Jeju Grand Hotel and the Mayhills Resort in Gangwon.