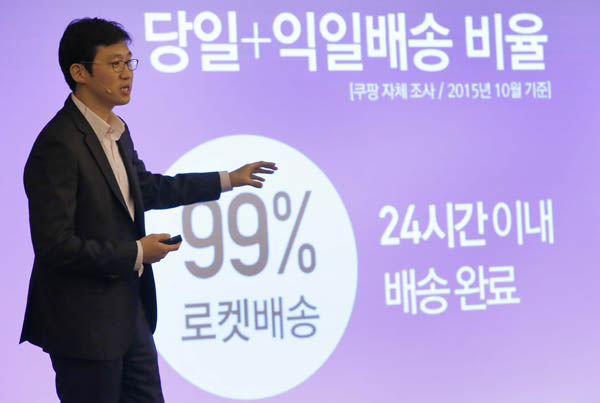 Coupang, a leading online retailer, will spend 1.5 trillion won ($1.3 billion) of the investment it has received since last year to beef up its speedy delivery services over the next two years.

The ambitious plan announced on Tuesday came eight months after the company declared it would transform itself into a comprehensive mobile shopping platform similar to Amazon. Before, Coupang was widely categorized as a so-called social commerce provider because it offered daily deals along the lines of rivals Ticket Monster and WeMakePrice.

With the 1.5 trillion won, the 5-year-old company that began as a small start-up will hire 29,500 additional employees. Of them, 18,000 will work at Coupang’s nationwide logistics centers to handle customer service, while 11,500 will become deliverymen responsible for what Coupang calls “Rocket Delivery,” which promises shipping within 24 hours of an order being placed. Coupang CEO Kim Bom said 99 percent of products ordered are delivered within a day.

“The best solution [for any country] to get over the economic crisis lies in fostering a start-up with innovative technologies and competitiveness,” he said at a press conference on Tuesday. “We wish to invigorate the Korean economy lingering in a lengthy downturn by reaping success.”

Since launching the Rocket Delivery service in March last year, Coupang has hired 3,500 “Coupang Men” to conduct its deliveries, a number the company the company claims is equivalent to 40 percent of the total hires that Korea’s top 30 conglomerates made over the same period.

Although Rocket Delivery has become a hallmark of Coupang that has propelled its rapid growth, it has also courted controversy. Logistics service providers have attacked the company for disturbing the established order of the industry by purchasing trucks and hiring its own deliverymen instead of using existing logistics services.

An association of delivery service companies sought an injunction order last month at the Seoul Central District Court, citing a law that the paid delivery of goods can only be made by vehicles registered with authorities for logistics purposes. The first hearing is scheduled for today.

But Coupang refutes the criticism by claiming Rocket Delivery is free of charge and is part of its customer service guaranteed for orders of 9,800 won or more. Given the unprecedented service, the legal and administrative authorities are currently having a hard time determining whether or not the company is actually in the wrong.

“I expect there won’t be a huge problem [concerning Rocket Delivery], given we reviewed possible legal conflict even before launching the service,” Kim said.

Despite the rosy picture that Coupang has been painting about its future, the company has been posting serious operating losses - 121.5 billion won last year. When pressed, Kim said the losses will continue to grow in size, and that this is the very reason the company continues to receive such massive investments.

“We are investing on expectations that there will ultimately be a virtuous circle [of large investment resulting in profits],” he said. “You won’t be able to understand if you think [of our plan] on a short-term basis.”

He took the example of Amazon, which has invested over 19 trillion won in its Amazon Prime service promising free two-day shipping.