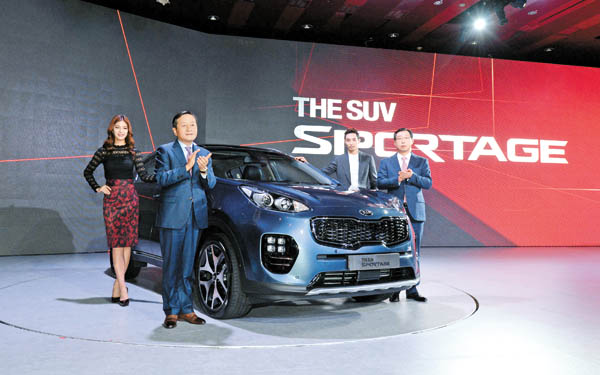 The Kia Motors CEO has been addressing the company’s sluggish sales by tailoring models to younger consumers in their 20s to early 40s, and the company’s surprising third-quarter report on Monday seems to have proved his instincts right.

Worries spread earlier this year after Kia Motors’ reported that its operating profit for the first half dropped 22.8 percent year-on-year to 1.2 trillion won, mainly due to aging models and struggles in China. It seemed doubtful that it could accomplish its domestic sales goal of 500,000 cars at a time when foreign automakers are aggressively expanding their market share. 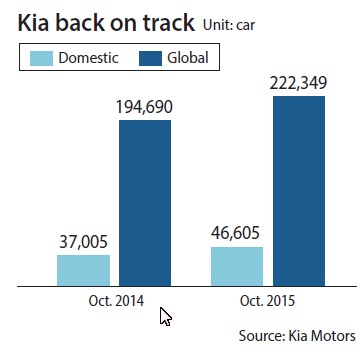 Much of the skepticism stemmed from a lack of innovation at the nation’s second-largest automaker, with critics accusing it of mimicking the moves of its sister company Hyundai Motor. Kia had once been praised for its design-focused ideas in the early 2000s, but the tactic had become antiquated in an age when consumers care most about efficiency and performance.

But after Park was promoted from CFO and vice president to CEO in July 2014, the 57-year-old declared that the company would lead with its Sportage SUV and K5 sedan models, and would include features that would appeal to young people.

Taking aim at young customers inseparable from their mobile devices, the Sportage came with the first wireless smartphone charging system in any local SUV. Of the 46,605 cars Kia sold in Korea last month, 7,585 of them were Sportages. It seems like Park chose the right target; 74 percent of the roughly 7,000 preorders made in September were made by men in their 30s and over. Sales for the new K5 sedan last month rose by 69 percent from a year ago to 6,000 in Korea.

“The Sportage SUV is a symbol that reflects the company’s innovation and progress,” said Jung Rag, executive vice president of Kia. “At a time when luxury imports led by German automakers are expanding their share in the market, providing competitive and affordable cars has been key for us.”

Among other features, the Sportage and K5 also allow drivers to switch their driving mode between fuel-saving “ECO” or performance-boosting “Sport.” Such features weren’t offered in their predecessors.

“We expect to accomplish this year’s sales goal of 3.15 million units,” said CEO Park at a K5 launch event in July. “The key to the success is the K5 and Sportage, which targeted young consumers.”

Kia promoted Park to the company’s top post based on an expectation that he’d improve its overall financial structure, but also because of his experiences in India, where he worked for the last 10 years. Since 2003, he has contributed to stabilizing the financial condition of Hyundai’s plant in India and improved its profitability.

After being appointed as the chief of Hyundai’s India branch in 2009, he led the successful introduction of Hyundai Motor’s i10 minicar and i20 hatchback. Cumulative sales for the i10 were 2,299,445 in the global market, according to the company in October.

Park is also the only CFO-turned-automaker CEO among the 22 CEOs in Hyundai Motor Group.

“When Kia was in trouble with its sales, Kia was able to put out the right cars at the right time under the CEO’s leadership,” said Kim Jin-woo, researcher at Korea Investment & Securities.