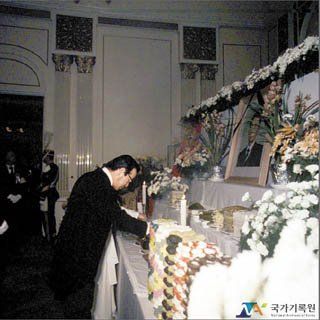 Kim Jong-pil burns incense at the wake for the late President Park Chung Hee on Oct. 28, 1979. He stayed at the Blue House for nine days to oversee the funeral arrangements. National Archive of Korea

I stayed at the Blue House for about nine days to oversee the funeral arrangements for President Park Chung Hee. His body had been laid in the casket prepared there.

I stood next to Ji-man, the late president’s son who played the role of a chief mourner, and his two daughters, Geun-hye and Geun-ryeong.

Government officials and lawmakers came to the presidential office to pay their respects at a memorial altar that had been set up. Among them was Kim Young-sam, the opposition leader. He must have had mixed feelings coming to mourn for the person responsible for his expulsion from parliament. 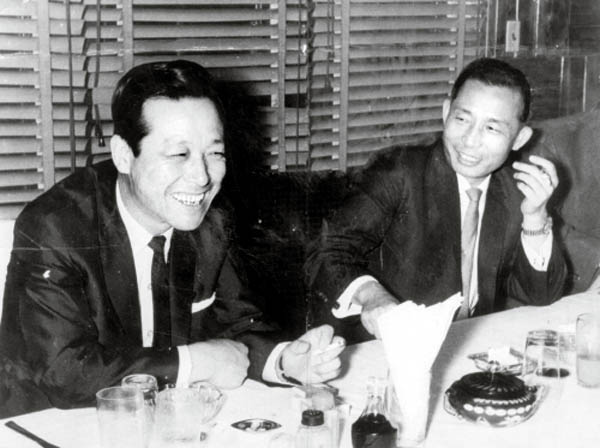 He shook my hands firmly without saying anything - he knew I was the only lawmaker from the ruling party who had objected to his ouster from the Assembly on Oct. 4, 1979.

Park’s funeral on Nov. 3 was solemn. A hearse covered in 70,000 chrysanthemums moved his body to his final resting place, away from the Blue House he had called home for the past 16 years. Sixty-two shots were fired in his honor - the number of years he lived.

Sitting behind Ji-man, I watched the religious ceremony and listened to the recording of a speech the president had made just a year earlier.

“We must strive to contribute to achieving the success of our nation and the creation of a new culture based on a strong patriotic spirit,” his voice echoed out over all of us.

The funeral was without a doubt very sad. But it was slightly different than the one held five years ago for the late first lady. Those who attended the ceremony for First Lady Yook couldn’t help but cry.

This time, most of the people there just looked shocked, unable to believe that President Park had been taken from us by his longtime confidant.

I couldn’t keep myself from crying. I couldn’t believe what had happened; I was speechless. I felt like I had been thrown at the center of a vast ocean, strangled and alone. To this day, when I think about his death, I feel helpless.

Next, the hearse drove past Seoul City Hall, where Park had stood just 18 years before and led his men to revolution. About 2 million people came out to the streets to mourn and bid their farewells before his body arrived at Seoul National Cemetery.

Following along, I thought about Park’s death and the implications it would have for the country, but I couldn’t arrive at any conclusive thoughts.

I watched the president be laid to rest next to his wife.

“A real revolutionary has passed,” I thought, “just like a real fighter.”

After the funeral, I stayed in my house for days looking back on the ups and downs of the past 18 years. I was left alone on the stage where the first chapter of the drama had already closed.

Looking back, I joined Park’s plan for the revolution, ready to put my life on the line. On May 16, 1961, a day before we rose up, our plan had already been leaked to the authorities. Nonetheless, Park told those of us with him, “Let’s go ahead with this. Even if we end up dead, history will eventually judge us.”

But after the revolution, Park was at times unsure of how to carry it all the way through to the end. When his political ambitions waned, I was there to revive them and worked to oust those around him who posed a challenge to his authority.

To help him cement his power, I stood at the forefront of forging diplomatic relations with Japan.

But about seven to eight years after he assumed the presidency, he slowly began to change.

In commanding his subordinates, he resorted to a “divide and rule” tactic in which he intentionally worked to spark discord among those under his order to prevent them from achieving a united front.

As a result, some of the men who had once been my revolutionary comrades turned on me and even attempted to tarnish my reputation in their struggle for power.

However, many of those who pledged their loyalty to Park initially saw themselves ousted, including former Korea Central Intelligence Agency Directors Kim Hyung-wook and Lee Hu-rak.

But Park never deposed me. While he was merciless and cold when it came to sharing power, he also had a genuineness and a childlike fragility.

Aware of that, I sometimes objected to his way of politics like nobody else, a few times warning him that I would walk away. But still, I never crossed that line.

Even when I challenged his judgment, I did it only with a single line and Park would laugh it off, never raising his voice with me.

That was the reason why I was able to assist him over nearly 20 years.

The fact that I was related to him through a family line must have helped though. It was President Park who initially floated the idea 1951 that I marry his niece, Young-ok, during the Korean War. Because of this blood alliance, I could not betray him, even at the most challenging times. When he attempted to revise the Constitution to prolong his power, I stood by his side.

It was the only way. And to this day, I do not regret that decision.

Park wanted to write a memoir and tried to collect documents for when the time came to write it. But it never happened.

He abruptly left this world, taking with him all the praise and condemnation that had been directed at him.

While his death was deplorable, his era, both praised and condemned, came to an end, and there a new door would open.

We could not just stand idly by, mired in grief. We were on a new path heading toward a new era in development.