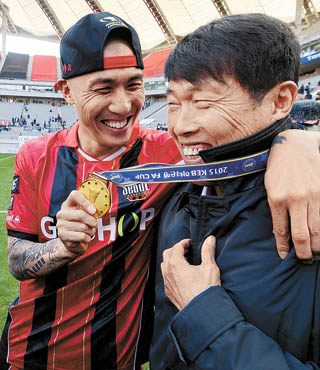 
FC Seoul defender Cha Du-ri knows his career hasn’t been quite as illustrious as his father’s. Nevertheless, they’re both extremely proud of their considerable accomplishments.

Particularly after this weekend, when the younger Cha captained FC Seoul on Saturday to win their first FA Cup since 1998.

The win was already destined to be a landmark as Cha Jr. had already decided the cup final would be his last game as a player.

Cha’s father Cha Bum-kun, was a German Bundesliga legend and was regarded as one of the top Korean footballers of all time.

For most of his career, Cha played in the shadow of his famous father. At his national team retirement ceremony in March, he admitted that having a great father was quite stressful.

But he has tried to use the pressure as motivation to play better. He received a warm embrace from his father when he retired from the national team, and before hanging up his boots, Cha made his father proud again.

After the club defeated Incheon United at the Seoul World Cup Stadium, Cha Jr. lifted the trophy as captain before thousands of fans. Immediately afterwards, Cha Jr. went down to the park and placed his winner’s medal around his father’s neck which prompted his trademark big smile.

Unlike fathers who have not reached the top of their profession, Cha Sr.’s reaction was not too enthusiastic. “My father told me he has also experienced winning the event,” Cha said. “My father is too famous. If he was like other fathers, he would be moved and amazed about it. Nevertheless, I believe he was happy for this.”

After graduating from Korea University, Cha went to Germany and played for seven different clubs as well as Scottish club Glasgow Celtic, while they won two titles. Putting an end to his European journey, Cha signed with FC Seoul in 2013 to play in the in the K-League Classic for the first time.

However, Cha wasn’t fortunate to win titles in his homeland.

Seoul went on to reach the finals of the AFC Champions League in 2013, and last time the team was in the FA Cup final, but ended in second place. This year, the Korea national team finished second in the Asian Cup in January after losing to host Australia.

Since Seoul is far from winning the K-League title this season, as Jeonbuk Hyundai Motors are on top with only three matches remaining, the FA Cup was the last title Cha could hope to win before retirement.

But his dream finale didn’t come easily on Saturday. After Japanese midfielder Yojiro Takahagi put Seoul on the board first in the 33rd minute, Incheon equalized in the 73rd minute with a Lee Ho-kyun’ goal.

With the match headed for overtime, Brazilian forward Adriano broke the deadlock in the 87th minute and Colombian midfielder Mauricio Molina scored from a curling corner kick in the first minute of injury time to confirm Seoul’s three-goal victory.

When the final whistle was blown, Cha burst into tears. The joy of winning was overtaken by the sadness that it would be his last match.

“For me, today was the last, because there will be no more opportunities and time to win the title,” he said. “After we allowed the equalizer, I thought about last year’s final and thought we could go into penalties. I’m happy and want to thank my teammates.”

The victory gives Seoul a ticket to the AFC Champions League next season. Though he could have another shot for the Asian title, Cha confirmed Saturday’s match would be his last.

For the remaining three matches in the K-League, Seoul has one match at home with Suwon Samsung Bluewings this Saturday. But Cha can’t play because of yellow card accumulation.

“Although I have to talk with my coach, I’m thinking about not playing in the remaining matches. I want to wrap up my career comfortably,” he said. “For a month, I had a pain in the sole of my foot and had to take medicine. I think this will be my last match as a player.”

“For the last three years, we talked both as player-and-coach and like friends,” Choi said. “Cha will be a big asset to Korean football. I wish him the best in his new life.”

For his next phase of his life, Cha said he hasn’t decided what to do. But one thing is definite, he won’t be remembered only as the son of Cha Bum-kun. “I haven’t decided what I should do, but I want to help Korean football,” he said.

Though he is still contemplating his future, Cha - who was born in Frankfurt, Germany, while Cha Bum-kun was playing in Germany - is set to receive coaching lessons in Germany after the season is over.

Cha’s Kakao Talk profile message, may point to his next direction. In German, it says: “Alles wird gut” (Everything will be fine).