Lee looks to lock down titles after stellar season

Lee looks to lock down titles after stellar season 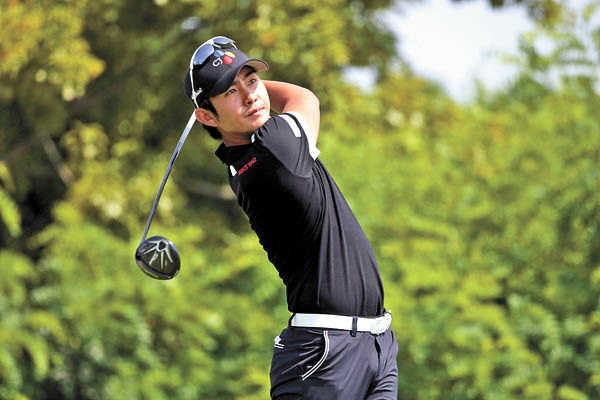 The KPGA Korean Tour has only 12 events this year, which is less than half of that on the women’s professional golf tour. Despite the small number of events, male golfers here are not only trying to wrap up the season with a win, but are also trying to take various tour titles.

Lee Soo-min is especially hungry as he looks to further gild his first year as a pro golfer.

Lee, who won the Gunsan CC Open in June, has already secured the Rookie of the Year title. But he is chasing bigger goals than just being recognized as the tour’s best newcomer.

The 22-year-old is first hoping to capture the tour’s MVP prize. Lee has amassed 2,095 points for the Ballantines MVP title, which is just 95 behind leader Lee Tae-hee, who claimed his first professional win at the Nefs Heritage in June.

Victory at this tournament would secure Lee the top prize because the winner gets 1,000 points. But even if fails to do so, he could still take the MVP title if he finishes inside the top five and Lee Tae-hee finishes lower than 15th.

Lee is also hoping to top the prize money list.

The Gangwon-native golfer currently ranks third by earning 273 million won ($241,251) this year. However, top-ranked Lee Kyoung-hoon, who has 315 million won, is not participating after deciding to play for Heiwa PGM Championship in Japan. Second-ranked Choi Jin-ho, who collected 303 million won, is also absent in order to participate in the Web.com Tour Qualifying School for the U.S. PGA Tour.

Since the winner of the Caido Golf LIS Tour Championship gets 60 million won, Lee has a chance to edge above two players, though No. 4 Moon Kyong-jun, who has 259 million won, has also an opportunity to top the list.

Lee Soo-min can also go for lowest scoring average title. He is currently listed third at 70.46, after Kim Gi-hwan (70.12) and Lee Tae-hee (70.26). Kim is also not playing in this event to participate in the Asia Tour.

No player has won four prizes since Kim Kyung-tae, who is currently the prize money leader in the Japan Golf Tour Organization with five wins this season, did so in 2007.

JTBC Golf, an affiliate of the Korea JoongAng Daily, will broadcast event live at 11 a.m. until Sunday.