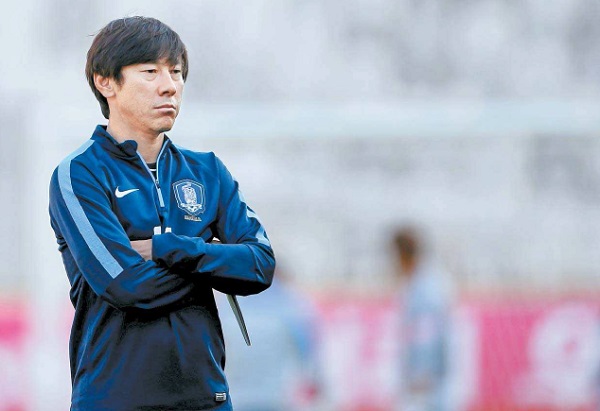 Korea Olympic football team coach Shin Tae-yong watches the team train at Hwaseong Sports Complex Main Stadium in Hwaseong, Gyeonggi, earlier this month. Shin’s under-23 football team will compete in a friendly tournament in China next week before the AFC U-23 Championship, the Asian qualifier for the 2016 Summer Games in Rio de Janeiro next year. [KOREA FOOTBALL ASSOCIATON]

Shin Tae-yong may have an impressive history of successes, but managing the Korean Olympic men’s under-23 football team brings a whole different kind of pressure.

He has proved himself by leading the Seongnam Ilhwa Chunma to win the AFC Champions League in 2010 and the Korea FA Cup in 2011.

Ahead of him now, however, is one of his greatest challenges - to follow in the footsteps of his predecessor Hong Myung-bo, who guided Korea to win the bronze medal at the London Olympics four years ago. It was Korea’s first Olympic medal in football.

With the Summer Games in Rio de Janeiro less than a year away, Shin knows expectations are high for the Under-23 Olympic football team. But before talking about medals, his first task is to qualify for the quadrennial event.

In order to be reach Brazil, Korea must finish in the top three in the Asian Football Confederation U-23 Championship in Qatar in January. Korea is in Group C with Iraq, Uzbekistan and Yemen.

As a final tune-up for the championship, Korea will play in a friendly tournament from Nov. 9 to 16 in China where Olympic teams from Colombia, Morocco and host China are also participating.

Korea’s 23-man squad for the tournament was announced on Monday. It includes Suwon Samsung Bluewings midfielder Kwon Chang-hoon, who has been impressive with the senior national team, and Gil Vicente midfielder Yeo Bong-hun who will be playing for the first time under Shin.

Shin, who is also serving as an assistant coach for the senior national team under Uli Stielike, said the basic format of the team is completed about 80 percent. The 45-year-old coach last month tested Europe-based players like Hwang Hee-chan and Ji Eon-hak in two friendly matches against Australia at home, which Korea won 2-0 and 2-1, respectively.

With Europe-based players showing their power, football fans now want to know who will be the wild card member and how he will build the team before the AFC U-23 Championship starts. In an interview with Ilgan Sports, an affiliate of Korea JoongAng Daily, Shin said he is confident the team will get through to the Summer Games next year.

Q. Do you have a wild card member in your mind yet for the squad?

A. This is not the right time to talk about that. Right now, I only focus on going to the Olympics. I’m not thinking about medals either at this point. [We can] think about those issues after we reach the Olympics.

What do you think about including Tottenham Hotspur forward Son Heung-min?

He is an extraordinary player and is the best Korean footballer at this moment. Under the condition that we are going to the Olympic, there is no hesitation to pick him. If he can do well, as he has been doing, we should bring him to the Olympics. He will contribute big for our team.

What about FC Barcelona B team forward Lee Seung-woo?

I don’t think about selecting him. Of course, he has very good talent, but we need to wait and watch him closely. He still has to grow his football more.

But you picked forward Hwang Hee-chan who is only two years older than the 17-year-old Lee Seung-woo. Why?

I know Hwang is three years younger than the age level of the Olympic football team, but I saw hope and possibility in him. He had competiveness despite playing with players who are three years older than him. If Hwang doesn’t perform well, I will take the blame. In friendlies against Australia, he proved that he can contribute to the team. But as for Lee, he is five years under and that’s a big gap. He is a player we need to watch. I emphasize again that I don’t think about picking Lee for our team.

What do you expect from the friendly tournament in China?

With K-League based players and Europe based players, I will try to implement tactics and strategies. This is good opportunity to upgrade our game and build our plays.

Kwon has been with the senior national team with Stielike. What did you say to him?

I met him at the Korea senior national team’s friendly against Jamaica in October and joked I may not pick him because the Olympic team selection is not easy. Despite saying that, I really have high expectations of him.

Why did you scold Bayer Leverkusen’s Ryu Seung-woo and FC Liefering’s Hwang Hee-chan after the friendly matches against Australia last month?

The players really played well, but after the second friendly match, I did scold them. I told them I will not select them again if they keep trying to hold the ball and not pass it to others just because they have gained some popularity. They understood my words.

How did you find players like Hwang and Ji who were almost forgotten?

Because of the performance of the Europe-based players our team has completely changed. I have been regularly checking players who are outside of Korea. I use all of my personal contacts to inspect them. Since they play in Europe, I think they have basic football skills. What’s important is whether they are actually playing in matches, even in second or third divisions.

Can you talk about new face Yeo Bong-hun?

He first went to Spain but now plays in the Portuguese second division. I saw his clips and he seemed to have good physique. If we are tired because of hot weather in the Middle East, I thought he could help us. As a wing forward, he runs a lot with his strength and stamina. I will check him out in this tournament.

There is no friction at all and it should not exist in our team. It’s something I don’t need to be worried about. I emphasize to players that we are one team. Any player who doesn’t obey this rule, I will not accept him. I don’t’ give special treatment to Europe-based players. Whether they are playing Europe or Korea, I tell them honestly about their performance.

What do you think about your opponents in the AFC U-23 Championship?

I don’t get stressed usually, but from December, I may be. I try to look positively on the championship. If we can win the first match smoothly, I think we can advance to the semi finals. So that’s why I’m focusing my best efforts on our first match against Uzbekistan. Iraq is also a tough opponent which made a successful shift to a younger generation of players, but I’m not worried. We just have to play against them and I’m not afraid of it. If we can build up our team, I think we can win the championship.