Korea’s biggest companies have separately announced they will begin training sessions for a combined 5,300 jobseekers.

The programs are part of a larger initiative spearheaded by the government to expand job opportunities for young people, who have been facing a worsening unemployment rate.

Under this particular program, conglomerates like Samsung, Hyundai Motor and SK, along with IT giant Kakao, will provide hands-on, technology-based training over an average three months. Those who complete the sessions will be given a chance to land a job at one of the companies’ suppliers.

The chief human resources officers of Korea’s 30 largest conglomerates unveiled specific plans for the training sessions due to begin next year during a meeting with Lee Ki-kweon, the minister of of employment and labor, on Wednesday morning in Seoul.

“The fate of our sons and daughters, whether they end up becoming a member of the N-po Generation [a generation that gives up numerous things in life due to their financial and employment status] or a future leader is determined by the national employment market in next couple of years,” Lee told the HR executives. “I think you [the employers] should abandon the perception of minimizing the direct hiring of salaried employees due to the stiff [layoff and employment requirements in] labor market.

“I hope that you stand at the forefront of direct employment of youth, with the firm conviction that labor reform can be completed,” Lee added.

All the programs will pay trainees between 500,000 won and 1.5 million won every month, which will come from both the government and company.

However, most of the programs introduced so far don’t actually direct trainees back to the corporation they’re working for; instead, the young people are transferred to one of the company’s suppliers for internship or employment. 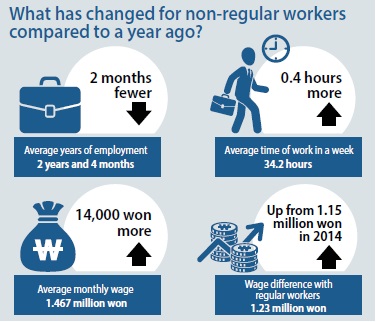 Employment is not guaranteed through any of the programs, which proved a disappointment to the government, which hoped they would lead to quicker hiring.

SK Group begins accepting application on its website today, with the option of starting its six-month program as early as January. It plans to pick 2,000 trainees, and will offer them instruction to prepare them for jobs in marketing, sales, management, design, telecommunications, semiconductors, chemicals and construction for three months. The trainees are then transferred to SK’s suppliers, start-ups and social enterprises, where they’ll enter an internship program for another three months. The program offers some job opportunities at its suppliers.

Samsung Group’s application season begins on Nov. 20, and will yield 2,500 trainees for next year. Samsung will also operate a six-month training program for electronics, machine engineering and molding, in which the trainees learn for three months and join an internship for the rest of their time. Samsung’s program doesn’t involve employment opportunities.

Hyundai Motor Group will begin accepting applications in early December, and will pick about 400 trainees to work for its auto parts suppliers. Hyundai’s program offers a two-month job training and three-month internship, and the suppliers will offer job opportunities to some at the end.

Kakao will run a similar program in app development, design, app service business development and communications, but the entire training and internship will happen at the company rather than at a supplier. After the trainee finishes their internship, the company will either extend the internship itself or factor their time at the company into their application for a full-time position.

The government has allocated about 2.1 trillion won ($1.86 billion) for next year’s youth employment and job creation budget, up nearly 20.6 percent compared to this year.

Part of those funds will go to the conglomerates or suppliers to subsidize the costs of hiring the trainees.

The announcement comes at a time when things are looking particularly dire for the nation’s under- or unemployed.

A separate study by Statistics Korea released on Wednesday showed that working conditions for non-regular workers (including those on a temporary contract) have worsened, while conditions for full-time employees have improved.

As of August, there were 6.27 million Koreans working as non-regular employees, which is 3.2 percent or 194,000 more than the same period a year ago. They now account for 32.5 percent of overall workers, which is an increase of 0.1 percentage point compared to a year ago. This is the first time in four years that the ratio of non-regular workers has increased. Although it is lower than 10 years ago when they took up 36.6 percent, it had been falling since 2012.

Non-regular workers, such as cashiers at supermarkets or construction workers, have been a major part of ongoing labor issues, as they’re the group most vulnerable to changes in the economy because of their lack of job security, lower pay and fewer welfare benefits.

As the number of non-regular workers has gone up, their salaries and other conditions have gotten worse.

The gap has only been getting worse.

Last year, the difference in salaries was 1.15 million won, whereas this year, it was 1.23 million won, an increase of nearly 7 percent.

The widening gap was largely due to increases in the paychecks of regular workers. When compared to a year ago, the monthly salary regular workers received increased 3.5 percent or 92,000 won. During the same period, the salaries of non-regular workers grew just 1 percent, or 14,000 won.

As a result, subscriptions to most major basic insurances - including the national pension fund, health insurance and employment insurance - have all fallen compared to the previous year, along with incentives, paid holidays and overtime pay.

Forty-four percent of irregular workers had health insurance, and only 24 percent were receiving their overtime pay.

However, the demographic that saw the sharpest increase in non-regular workers was people in their 60s.

While those between the ages of 50 and 59 accounted for the largest number of non-regular workers (21.5 percent), the number of people in their 60s - already the second-largest group at 21 percent - grew more than 11 percent.

Those in their 50s saw the second-fastest growth at 5.3 percent.

The only group to see a shrink in non-regular workers were those in their 30s and 40s.