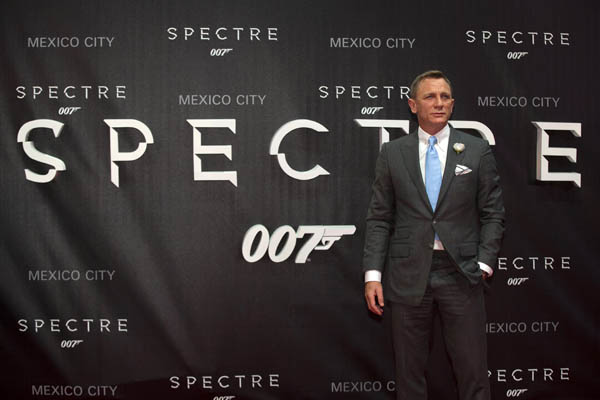 MEXICO CITY - Leading actor Daniel Craig waxed poetic about the apocalyptic opening scenes in the James Bond flick “Spectre,’’ as the film prepared its regional premiere in Mexico City where some of those parts were shot.

Fittingly, Craig showed up in Mexico on the Nov. 1-2 Day of the Dead holiday for Monday’s premiere. The opening sequence features a sort of Day of the Dead celebration, with skeleton and skull costumes and floats.

Then, in classic Bond style, the real fireworks start.

The British actor told The Associated Press in an interview Sunday that “we have buildings collapsing, we have helicopters, and I’m walking on the top of buildings and running to the streets’’ in the opening sequence.

Craig says “there are so many things that have to come together to work and it’s a testament to the people who work on this film that they did so beautifully.’’

The film is directed by Sam Mendes and was filmed in March in Mexico City, one of several locations. The film opened in Great Britain on Oct. 26, and is set to open in the United States, Canada and the rest of Latin America on Friday.

The 47-year-old actor has been playing Agent 007 since his debut in 2006 in “Casino Royale.’’ After nine years with the character, Craig said “I don’t judge him at all.’’

“I just think he’s an incredibly interesting part to play and I derive immense pleasure from doing it. You know, it’s hard work but anything worthwhile is hard work,’’ Craig said.