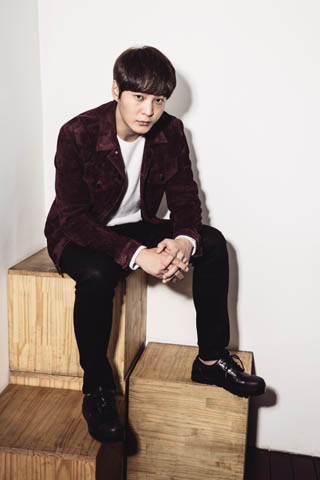 Few actors in their 20s are as prolific and critically acclaimed as Joo Won.

Not long after his impressive performance as a gifted doctor in the hit drama series “Yong-Pal,” he is now playing a devastated man whose beloved younger sister gets murdered by a mysterious serial killer in the film “Fatal Intuition,” which opened in theaters Oct. 28.

Besides freely crossing between the small and silver screen, he also continues to perform in musicals, which is where he began acting in the first place. So far, Joo has acted in at least two to three pieces every year.

What keeps this relentless actor going? The JoongAng Ilbo talked to Joo about his active career and more.

Q. What does the latest film, “Fatal Intuition,” mean to you?

A. I had a very good feeling about it from the start. I felt like I could show a different side of me. It made me really ambitious and motivated. After the filming was done, I was sure that it was a whole new experience for me. I believe I matured through each of my works, but I really felt like I made a big leap with “Fatal Intuition.”

With one of the scenes, I hear you cried for an hour even after the director OK’d it.

Yes, it was a scene where Jang-woo goes all wild and is locked up in a cell. He wanted to kill the cold-blooded murderer who was right in front of him. I actually have never wailed like that my entire life. I did hear the director yell “cut,” but I couldn’t stop crying. I never knew I could act like that. It was an unforgettable experience.

Jang-woo appears to trust his gut feeling in his pursuit of the murderer. Are you also like that?

I think so. I believe that whenever your intuition is so strong, there’s a reason for that. I do know that sometimes intuition evolves into suspicion or obsession.

Do you also use your gut feeling when choosing your character?

I do resort to emotions. When I meet a character that I can cry with, that I feel hurtful with, I tend to choose it. There are certain roles that you can particularly emphasize with. That’s how I felt with my character Gu Ma-jun in the 2010 KBS drama “King of Baking, Im Tak-gu.” People said he was a villain, but I sympathized with him so much and rooted for him in my heart.

You keep moving between the small screen, silver screen and theater. Is it because of your confidence or insecurity?

I’m the type who thinks you learn more working rather than taking a break. Part of it is because I’m so ambitious. When I get a good scenario or a character, I don’t want to lose them to anybody else. Maybe that’s the insecurity you are talking about? (laughs).

Although almost all your dramas were hits, that was not the case with your films. What have you learned?

I realize that films are so difficult. And it really was heartbreaking to see films that I worked on so hard do badly in the box office. I’m afraid I will continue to feel that way. I’m not saying that all films I work on will fail. But I’m saying not everything I do will succeed. I guess if there’s one thing I’ve learned, it’s that.