At Korean buffets, the big fish eat the small

At Korean buffets, the big fish eat the small 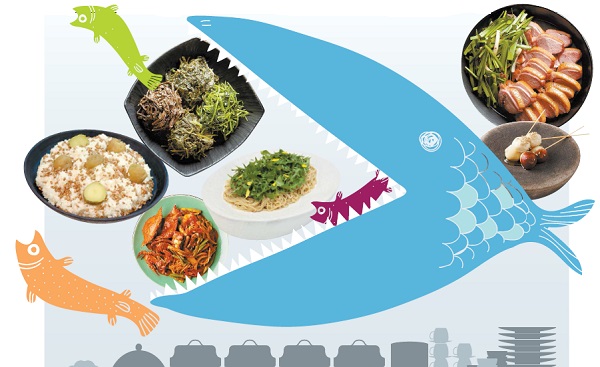 Many of hot restaurants recently are those that serve Korean food, or dishes that use the key ingredients used in Korean cooking.
While some foodies go for street food, others choose fine dining, and still others opt for buffet restaurants.

The latter option, however, has been a talk of the town from earlier this year, as many mom-and-pop Korean restaurants located near to the relatively new buffet restaurants are complaining that such places are taking away their customers.

The Korea Foodservice Industry Association released the results of a study conducted in August and September showing how one Korean buffet restaurant ? of the type operated by a large company can hurt the business of about 50 other restaurants in the surrounding area.

Smaller restaurants that serve Korean food buffet-style have been around for awhile, but they were not a popular option until large companies like CJ and Shinsegae Food decided to launch their own brands.

Previously, most of the popular buffet-style restaurants served Western food. But after CJ launched Gyejeolbabsang, the first of its kind, in 2013, the number of Korean buffet restaurant brands rose to around 80 nationwide, according to the association. Eland followed CJ with its own brand, Jayeonbyeolgok, and Shinsegae Food launched Olban.

The new restaurant trend, which stemmed from the recent popularity of eating healthier Korean food, has been generating buzz as well as discussion about whether to try to limit these companies from continuing to open more branches.

Such policies preventing large chains from driving out mom-and-pop stores already exist in other sectors, such as bakeries and convenience stores.

The debate over Korean buffet-style restaurants has its beginnings in a 2013 agreement between large and small restaurant operators. Under the agreement brokered by the Korean Commission for Corporate Partnership, some restaurants that serve Korean, Japanese, Chinese, and other cuisine decided to limit further expansion of large chains.

The purpose of the agreement was to encourage large companies to pursue new business ideas rather than running smaller restaurants out of business.

However, under the agreement, the large companies still had some leeway. They would be permitted to open new branches in multipurpose malls or complexes, in buildings that measure over 20,000 square meters in size, and within 100 meters of a subway exit.

The small restaurateurs agreed to these exceptions because they could not afford to open up shop in those high-rent areas anyway, according to the commission.

The large restaurant chains decided to take advantage of the exceptions, and began opening Korean buffet restaurants in the permitted areas. However, now small companies and mom-and-pop restaurants are taking issue with the development.

“Previously, the concept of Korean food buffets wasn’t a big issue at all,” said Yun Young-su, a manager at the commission.

“But now, diners are developing different tastes, and the dining-out environment has changed,” he continued. “So rather than what was popular then, such as [Western-style] family restaurants like Outback Steakhouse or VIPS, Korean buffet restaurants have been receiving more attention since last year.”

With the initial agreement between the two parties from 2013 expiring in May, the smaller companies are planning to try to revoke the exceptions and implement stricter regulations on large companies opening new Korean restaurants.

At the same time, the conglomerates argue that they have followed the regulations well and found a way to keep their business going while only doing business in areas allowed under the exceptions.

The commission will start hearing the arguments from small and large restaurateurs as early as tomorrow, so that it can negotiate another amicable agreement like the one from two years ago. It hasn’t set a date for the new round of negotiations, but they are expected to start this month, with an agreement anticipated in March or April.

“We will gather comments from a variety of food industry experts, along with strategic plans from both small and large companies, so that we can make the upcoming discussion more worthwhile,” said Yun, who is in charge of arranging the discussions.

He declined to comment further on the commission’s strategy to reach an agreement, saying that it would serve as a neutral party in the discussions.

Rep. Park Ji-won of the New Politics Alliance for Democracy recently announced that he is proposing a motion to stop large companies from “meddling with local business ecosystem” with their Korean buffet restaurants.

He argues that the number of Korean buffets has skyrocketed since 2014, when there were only three in 2013, and other big companies could decide to join the trend. Also, he pointed out that the current recommendations from the commission have limitations in that they can’t be modified in real time, even though unexpected issues may arise that hurt smaller businesses. So he wants to modify the existing corporate partnership policy so that the commission can take action immediately if it sees the need to make amends.

“We wanted to find a way to correct the current situation before it becomes a bigger problem,” said Kim Jong-seok, Park’s chief of staff.
Although it is hard to predict when the modification will be approved by the General Assembly’s Trade, Industry and Energy Committee as well as during the main Assembly session, talking about the issue may provide enough warning to any companies that are planning to open new branches, Kim believes.

“Right now, there is no regulation to put a halt on companies trying to expand, but their worrying about whether the new modification gets approved will put some limitations on their efforts,” he explained. “In that sense, even if the motion does not get passed in the future, it will still bring about some positive effects in the present.”

For local companies that operate such Korean buffet restaurant chains, being on the receiving end of blame for hurting small businesses feels unfair.

“We follow regulations recommended by the commission for corporate partnership and found a way to make business in the area that wasn’t much developed before,” said one official from a large company.

“If there is another round of regulations, that could work as reverse discrimination and basically tell us not to start any business projects.”
Furthermore, these large companies have launched a variety of campaigns and promotions to seek out ways to benefit not only the diners in Korea, but also farmers, aspiring cooks or potential foreign customers.

Eland is gearing up to expand its business overseas rather than only targeting local diners. After testing its menus with Chinese visitors and experts, it has decided to open two branches in Shanghai within this year.

If the two restaurants perform well, Eland will expand its Korean buffet restaurants all across China, aiming to open around 200 restaurants by 2020. It even plans to bring the brand to other countries in Asia, including Taiwan and Malaysia.

To keep the authentic taste of Korea, the company said it will import condiments and seasonings from Korea, but will use fresh local vegetables in China and elsewhere.

As for CJ, the company has been seeking was to make its business more mutually beneficial with other industries in Korea by working with local farmers.

The company has signed contracts with numerous farmers so that farmers need to worry less about circulating their crops and vegetables and can focus more on growing better quality ingredients.

Furthermore, CJ holds a small farmers market at its buffet restaurants so that diners can buy the fresh ingredients on the spot after their meal.
Meanwhile, Shinsegae Food is focusing on hiring more local manpower. It has signed memoranda of understanding with four local colleges, including the Health Institute of Technology and Korea Tourism College, so it can train the students there.

The company has developed special curriculum for these students in order to provide proper training for aspiring cooks. If students who participated in this program apply to work at Shinsegae Food after graduating school, they will automatically advance to the interview stage without needing to submit resumes.

Other operators of Korean buffet-style restaurants have noted that some of the market leaders are not, in fact, run by large companies.

“We think the market for the buffet-style Korean restaurants expanded and became more loved by the public thanks to the [big name] companies,” said Choi Sun-young from the PR company Social Hug, who promotes the brand.

“We are not part of the parties that should follow [the commission’s] regulations because we are a smaller-sized business, but we have always worked with other fellow individual entrepreneurs who want to start their own business, or local farms, so that we can be a brand that symbolizes cooperation.”