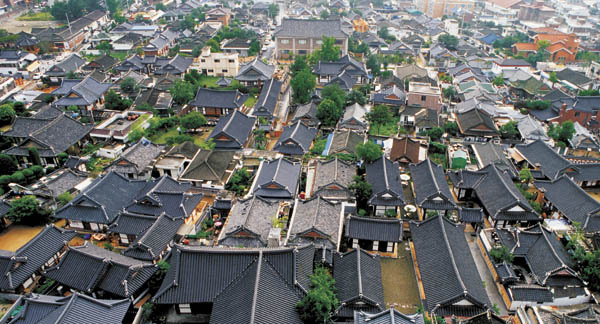 A visit to a folk village is almost always on tourists’ lists of things to do.

After all, that’s where you can get a glimpse of how the country’s people lived decades or centuries before, see old houses, try on ancient outfits and taste traditional foods.

One of the most popular hanok villages in Korea is undoubtedly the Jeonju Hanok Village in Jeonju, North Jeolla, in Korea’s southwestern region. The number of annual visitors to the village broke the five million mark in 2013 and is slated to hit 10 million in coming years.

But in recent months, the popular destination has made headlines for what appears to be an “identity crisis.”

About 18 vendors of satay, or grilled meat skewers that are highly popular as street food, have brought complaints, partly for all the smell, smoke and crowds they cause and partly for not being “traditional food” and damaging the dignity of the folk village.

But this controversy leaves the big question: Just how far should hanok villages go to attract tourists?

There is no official figure from the government or any other credible source for how many hanok villages there are in Korea, although some say it’s likely around 170. Some of these villages have opted to go commercial and become a theme park, like the Jeonju Hanok Village, while others try to keep things as traditional and quiet as possible, like the Yangdong Folk Village in Gyeongju, North Gyeongsang. But which is the best approach?

To examine the issue, the Korea JoongAng Daily talked to some of the members of the Committee for Cultural Heritage, a panel of outside experts that advises the government’s Cultural Heritage Administration. In addition, the reporter visited a newly opened hanok village in Ilsan, Gyeonggi, which is currently hosting a light festival where visitors are allowed to grill their own barbecue. And this past summer, the village even opened an outdoor swimming pool. 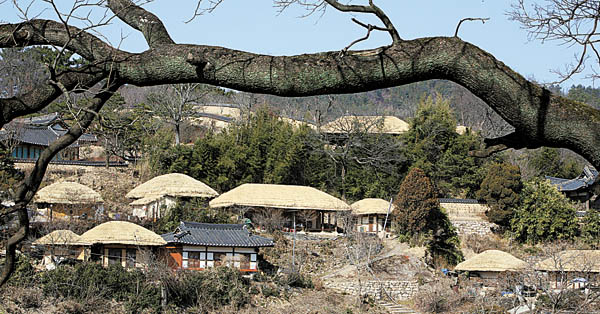 Some are raising their eyebrows at the idea of eating samgyeopsal (grilled pork belly) at a hanok village, while others ask, “Why not? What’s so bad about enjoying tradition with some fun?”

Recently, the Jeonju Hanok Village has often been featured on TV as a place where you can experience unique and tasty foods, rather than as a place to see hundreds of beautiful hanok.

The foods range from skewered octopus and fried squid to macaron ice cream and churros.

It’s easy to see people forming long, snaking lines as they wait to get a taste of these foods for which the hanok village is now known. These foods are neither Korean nor traditional, and their nationalities and origins are often obscure.

“I think I’d like to see more sellers of tteok [rice cake], bukkumi [traditional pancakes] or jeon [another type of traditional pancake],” Lee Mi-yeong, 59, says. “I think they go better with the hanok village.” 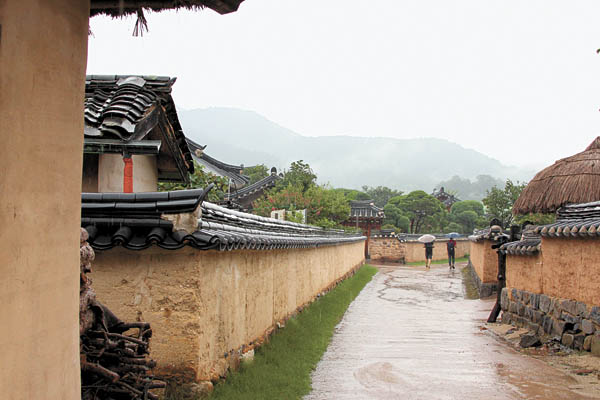 Oh Jeong-geun, 53, who worked as a marketer for hanok villages for more than 10 years, also said, “Hanok villages these days are turning into big food courts whose identity is obscure,” adding that foods sold there are more often than not fast food that goes against the whole idea of a slow, traditional lifestyle that villages often envision.

Besides the food stalls, there are also many shops selling Chinese-made goods, including selfie sticks and plastic toys.

As complaints began to pile up earlier this year, especially about food vendors causing smells, smoke and crowds, in addition to damaging the image of the hanok village, the Jeonju government in April began considering kicking the vendors out. 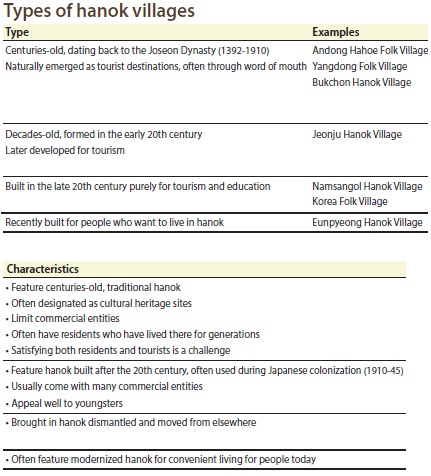 The action would fall under the city development regulations revised in 2011 to limit the number of “fast food restaurants.”

The city revised the regulations after the Jeonju Hanok Village was designated as a Slow City by Cittaslow International in 2010. Cittaslow was founded in Italy in 1999 as part of the slow movement. As slowing down the pace of life caught on in Korea, several Korean cities joined the movement.

Jeonju consulted with the Ministry of Agriculture, Food and Rural Affairs; the Ministry of Oceans and Fisheries; and the Ministry of Food and Drug Safety to make sure that skewered food is categorized not as traditional but indeed “fast food.” But the ministries evaded giving a clear answer and said it’s up to the city government.

Nonetheless, the Jeonju government in June was leaning toward closing down the satay vendors. “Kicking them out is inevitable,” an official in the Jeonju government told the Korean media at the time, “as we also have to get re-recognition as a Slow City from Cittaslow International in November.”

But the vendors of skewered food formed an alliance and fought back, saying that if the city government is going to restrict “non-traditional fast food,” other eateries like macaron ice cream and coconut juice should also go.

In late September, the Jeonju government announced that it decided not to close down the vendors as they agreed to improve sanitation. But officials added that they won’t allow new satay vendors in the village.

A recent visit to Jeongwa Hanok Village in Ilsan, just outside of Seoul, took place on a dusty afternoon.

Workers were busy installing lights and cheongsachorong, traditional red-and-blue lanterns, as the hanok village was preparing to kick off a three-month light festival, at which visitors can enjoy hanok and lights at night and also grill food outdoors.

When asked whether Jeongwa was more similar to the highly commercialized Jeonju Hanok Village or quiet and traditional Yangdong Folk Village, village representative Song Hyeon-min replied, “Our village is different from all hanok villages in Korea.”

Most hanok villages in Korea fall into four categories, according to experts.

One type is centuries-old, dating back to the Joseon Dynasty (1392-1910). These villages, in many cases, naturally emerged as a tourist destination, often through word of mouth. They are often designated cultural heritage sites and thus limit the number of commercial activities. Examples include the Yangdong Folk Village; the Andong Hahoe Folk Village in Andong, North Gyeongsang; and the Bukchon Hanok Village in Seoul.

Another type was formed in the early 1900s, including the Jeonju Hanok Village. These feature hanok built in the 20th century, often used and modified by the Japanese during the colonial era (1910-45), and thus are freer from development restrictions.

The third category is theme parks, like the Korea Folk Village in Yongin, Gyeonggi, and the fourth category is residential areas, featuring modern hanok and often targeting retirees dreaming of living in traditional-style homes.

But Jeongwa is different. About 80 new hanok are being built, but in the traditional way, using only the top-quality wood that was also used to build royal palaces. Currently, only about 20 have been completed, as the traditional building takes time; the process includes drying the timber for three years.

“Eventually, we are seeking to be a hanok village where people can get away from the city and relax,” Song said. The village, which is run by a family business, plans to house hanok accommodations, saunas, restaurants and a host of traditional cultural activities.

Jeongwa Hanok Village operators say they are not after immediate profits, even though they are holding the light festival in addition to educational programs for kindergartens to satisfy growing demand.

Rather, they say they are pursuing a grander plan: To build a hanok village that will last for hundreds of years and be the future Yangdong Folk Village or Andong Hahoe Folk Village. They allege to have earmarked 70 billion won ($62 million) for the project.

It could be a hit or miss, but the operators seem to be highly determined. “We are building something to pass on to future generations,” Song said.

Most of the experts the Korea JoongAng Daily talked to agreed on the need for a wide spectrum of hanok villages.

“In case of the Yangdong Folk Village, the entire village is Important Folklore Material No. 189 and has been added to the Unesco World Heritage List, so preservation is important,” he said. “But that’s not the case with Jeonju.” Baek is the chairman of the Committee for Cultural Heritage in the area of folk heritage.

Hwang Pyeong-wu, a former member of the Committee for Cultural Heritage and currently the director of the Eunpyeong History Hanok Museum, also told the Korea JoongAng Daily that since the hanok in Jeonju Hanok Village was built during the Japanese colonial era, officials shouldn’t restrict commercialization too much.

“I think it’s okay to allow food like skewered octopus,” he said. “But commercialization should be within the boundaries of keeping the dignity and respect for tradition.”

Kim Bong-ryol, an architect and president of the Korea National University of Arts, emphasized the importance of respecting the opinions of the residents first and foremost. Five years ago, at Jeonju Hanok Village, about 1,000 households called the village home, but today, only 650 households remain.

“If residents leave, hanok villages will also lose life and eventually, tourists won’t go there,” Kim, chairman of the Committee for Cultural Heritage in the area of architectural heritage, said in a recent interview with the Korea JoongAng Daily. “It’s impossible to stop commercialization altogether, but the residents’ opinions should be reflected and also residents should be given priority to do business.”