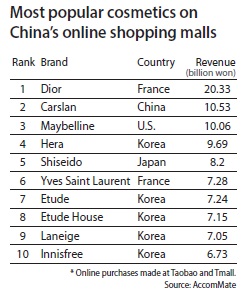 Korean cosmetics are still dominating Chinese online shopping malls, but when it comes to brand power, they’ve got some making up to do.

According to AccomMate, the biggest distribution channel for Korean products in China via e-commerce, Korea ranked No. 1 in cosmetics sold to Chinese consumers on major Chinese e-commerce websites, including Taobao and Tmall, between June and August.

But in terms of individual brands, Korean companies fell on their face - only Hera made the top five by sales.

This was the second consecutive year that Korea ranked first. The nation saw sales increase 28 percent, or 15.3 billion won more than the 53.5 billion won recorded over the same period last year.

However, Japanese cosmetics saw a much sharper growth at 122 percent, from 10.8 billion won to 24 billion won during the same period.

Thailand was also a winner. The country’s cosmetics brands failed to be included in the top 30 sold in China last year, but this year, Thailand’s Mistine cosmetics ranked 22. Overall, Thailand ranked seventh by country.

France’s luxury Dior took the top spot for the second straight year, although sales fell year on year. This year, it sold 20.3 billion won worth of cosmetics, a near 18 percent decline from the 24.7 billion won made last year. The second-ranked company was China’s own Carslan, followed by American brand Maybelline. Korea’s Hera took fourth, while Japan’s Shiseido ranked fifth.

The biggest loser was AmorePacific’s IOPE, which tumbled from eighth last year to 27th.