Low-alcohol tipple will keep you in good spirits

Low-alcohol tipple will keep you in good spirits 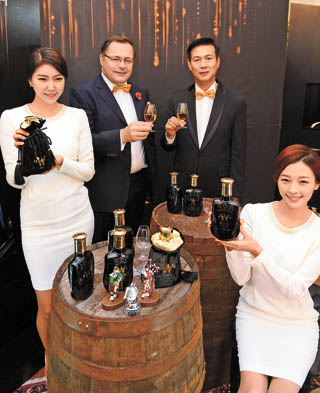 Diageo Korea has stepped up its marketing of low-alcohol drinks in Korea to meet growing demand.

The whisky importer introduced its new “W Rare by Windsor” beverage at the British Embassy in Seoul on Wednesday. The drink has a 35 percent alcohol by volume (ABV) content. Scotch whisky has a typical ABV of more than 40 percent.

The company previously introduced “W Ice by Windsor,” with 35 percent ABV, in Busan and South Gyeongsang in March and in Jeju in July.

The newest “W Rare” aims to attract traditional whisky drinkers with its smooth flavor that keeps the uniqueness of whisky while lowering the alcohol content.

Although W Rare and other low-alcohol drinks are marketed as whisky in Korea, they are considered spirits by international standards, as their ABV is below 40 percent.

The drink is named after the rare liquid which comes from one out of 200 distilled barrels chosen by a master blender. Described as a blend of Scotch whisky with flavors and natural red date essence, it includes liquid distilled at the Royal Lochnagar distillery in Ballater, Scotland, near the Queen’s highland residence in Balmoral.

“The biggest aim of our company is to become a cultural evangelist that can effectively ‘blend in’ the traditional heritage of Scotland and domestic consumer needs,” said Cho Kil-soo, CEO of the U.K.-based Diageo Korea. “And ‘W Rare’ is the product to play the role.”

Windsor is a leading whisky brand in the domestic market and has managed to retain its No. 1 position from 2006 until now.

As for the super-premium segment, which accounts for 45.6 percent of the domestic whisky market, the company has been No. 1 since 2000, according to the company.