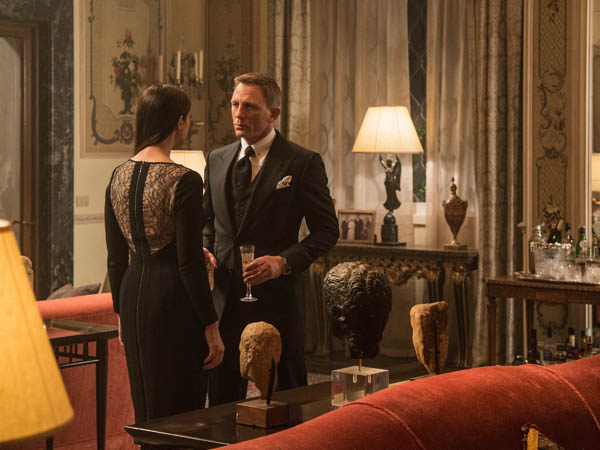 In this image released by Metro-Goldwyn-Mayer Pictures/Columbia Pictures/EON Productions, Monica Bellucci, left, and Daniel Craig appear in a scene from the James Bond film, “Spectre.” The movie releases in U.S. theaters on Friday and in Korean theaters on Wednesday. [AP/NEWSIS]

Where to go when 53 years of action-scene set pieces have exhausted seemingly every exotic corner of the Earth? How much globe can a globe-trotter trot?

The answer kicking off the latest James Bond film, “Spectre,’’ is a doozy. Beginning with the words “the dead are alive’’ across the screen, director Sam Mendes opens on a long shot through the Day of the Dead in Mexico City, tracking Bond (Daniel Craig), masked but unmissable in a skeleton costume, through the festive throngs. He ushers a woman (Stephanie Sigman) out of the masses and into her bed, only to disrobe into a suit, step out the window and stride down the ledge. Finally spying his real prey, explosions follow, walls collapse and the resulting chase spins into a helicopter careening over a mobbed Zocalo Square.

It’s a sequence of such startling audacity (some 1,500 extras were used) and gorgeous black-on-sepia tones that a nagging desire to hit “rewind’’ persists through the rest of “Spectre.’’ Handsome and riveting as it often is, the film never again reaches such heights.

It’s not for lack of effort. Mendes, who helmed the last entry, the smash “Skyfall,’’ has raised the bar on 007, pushing the budgets and the grandiosity in a bid to not just reinvent the franchise but overwhelm it with eye-popping craft.

“Spectre’’ is Craig’s fourth Bond movie, and his muscular tenure has been defined not just by his full embodiment of the character, but his overall stewardship. His ability to attract top-notch talent, in front and behind the camera, and to imbue the spy series with a seriousness of purpose reads in every frame. His Bond may still sip martinis, but he’s stone-cold sober.

Having ushered 007 through the Eva Green highs of “Casino Royale,’’ the overwrought lows of “Quantum of Solace’’ and the climactic extravagance of “Skyfall,’’ “Spectre’’ finds Craig’s Bond pursuing the videotaped orders of Judi Dench’s late M in a more traditional 007 plot. Her instructions lead him to a shadowy international criminal organization led by a longtime Bond villain, Franz Oberhauser (Christoph Waltz).

The pursuit skirts the snowy peaks of Austria, the cloak-and-danger cobblestones of Rome and the Mediterranean maze of Tangier, with enough corresponding outfit changes to stock a runway show. Bond is operating outside of MI5, where new head Max Denbigh (Andrew Scott) is overhauling the intelligence services with digital surveillance that he says will render the old-fashioned 00 program obsolete.

The surveillance reference is a mostly shallow attempt at political depth. But such self-aware conflicts between new and old now constantly bounce throughout Bond films. The mythology, fearful of showing its age, is perpetually torn down and built back up again like an ever-rebooting superhero. Every gesture (and drink order) is a winking comment on 007 traditions; even the opening recalls the New Orleans funeral march of “Live and Let Die.’’ When it works, it’s refreshing; when it doesn’t, it’s merely repackaging.

“Spectre,’’ scripted by John Logan, Neal Purvis and Robert Wade, feels more like the latter. For the first time, all of Craig’s reinvention hasn’t carried Bond all that much further than where the spy always was - especially when it comes to the women that adorn “Spectre.’’

First there’s Monica Belluci as the widow of the man Bond kills in Mexico City. He sleeps with her after picking her up at the funeral. She’s quickly dispatched for Madeleine Swann (Lea Seydoux), whose family connections bring Bond closer to the elusive Oberhauser.

Seydoux, the French actress of “Blue is the Warmest Color,’’ gives the film a jolt, but the romance between Swann and Bond is slight and the character is little more than Bond’s usual love interest. What’s missing most is the steely spine of Dench. The off-kilter menace of Waltz would seem perfectly suited for “Spectre,’’ but his scenes pale in comparison with Javier Bardem’s Raoul Silva in “Skyfall.’’

Also with big shoes to fill is cinematographer Hoyte van Hoytema, stepping in for Roger Deakins. He surrounds the film with shadows and reflective mirrors, ably capturing Craig’s slinky stride in any locale.

The movie will be released in Korea on Wednesday.

Two and a half stars out of four. AP