Some eager buyers line up in front of the H&M store Myeong-dong, central Seoul, while others camped in front of the store since last weekend, waiting for the store to open on Thursday morning to get their hands on items in the Balmain collection. [NEWSIS]

Six days of camping out on the street ended in chaotic scenes on Thursday morning as hundreds of shoppers poured into four H&M stores to scoop up items that were part of the store’s latest collaboration with Balmain, the French haute couture fashion house.

In less than eight hours the stores were almost sold out of limited-edition clothes, accessories and shoes, according to H&M Korea. Online sales were not available in Korea.

“Prospective buyers [of the collaboration collection] used to line up two days at most prior to the sale,” said Cheong Hae-jin, PR & communications manager at H&M Korea. “This time we noticed people setting up tents on the night of Oct. 30 in front of the Myeongdong and Apgujeong stores. We have never seen such a lengthy period of waiting for our collaboration collection.” 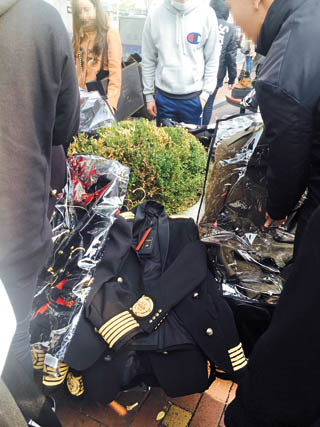 Some successful buyers sold the Balmain products they bought in front of the H&M store in Apgujeong, Gangnam, southern Seoul, on Thursday. Some Balmain products were being sold at five times the purchase price. [LEE YOU-JIN]

For the first time since the Swedish fashion giant entered Korea in 2010, the brand was forced to cancel a pre-sale event for fear of an uproar as customers queued for days in the street.

The Korean operation of H&M, which also runs the COS brand, has launched collaborations with a handful of prominent designer brands, including Sonia Rykiel, Lanvin, Versace, Marni, Maison Martin Margiela, Isabel Marant and Alexander Wang. In terms of the fastest sell-out, Italian label Marni set a record of three-and-a-half hours in 2012.

At the Myeongdong store at 7:50 a.m. on Thursday, the first 150 shoppers in the queue were divided into five groups of 30 and each group was allowed to shop for 10 minutes. The remaining people in the line-up were given bracelets in different colors indicating the time they could enter the store.

The majority of the eager shoppers who camped out for days were university students in their early 20s who waited in the cold for a chance to buy Balmain at less than a 10th of the original price.

But many in the shopping craze were aiming for hefty profits from reselling those hard-to-get fashion items.

“We are assuming two or three groups out of the initial 15 groups consist of resellers, but the portion of resellers among those campers appears minimal,” said Cheong.

Some of the campers posted messages on Web boards days before the sale, accepting reservations for items from prospective buyers. Others were spotted trading with customers immediately after leaving the store, with shopping bags packed with newly-purchased goods.

At Joonggonara, the biggest used item market community on Naver, the No. 1 portal site in Korea, hundreds of postings by resellers popped up soon after sales were initiated.

Reselling posts received derision as well. Comments ranged from, “So you bought them by spending nights on the street?” to “Wouldn’t it be better to actually work than to sleep out to earn that money?”