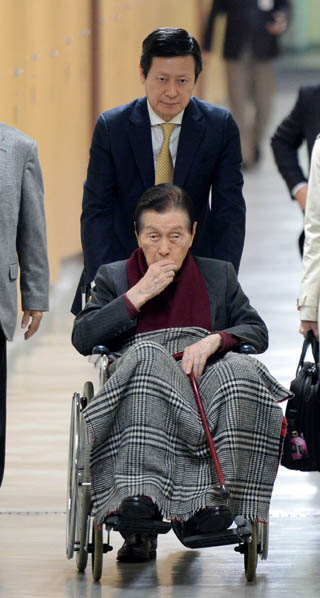 Lotte Group founder Shin Kyuk-ho leaves Seoul National University Hospital in Jongno District, central Seoul, while his eldest son and SDJ Corporation Chairman Shin Dong-joo pushes his wheelchair on Thursday. The 93-year-old senior Shin was hospitalized on Monday to treat an infection caused by prostatic hypertrophy, according to the hospital. While in the hospital, his younger son, Lotte Group Chairman Shin Dong-bin, was reported to have made a brief visit, although the family doctor said the two men’s conversation was very short. [NEWSIS]