Kang prepares to take her final bow in Korea

Kang prepares to take her final bow in Korea 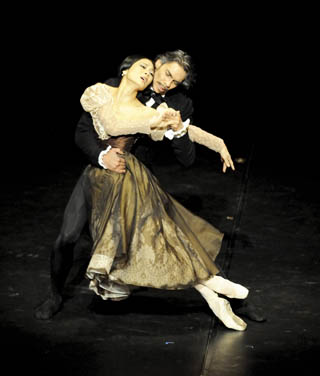 Two principal dancers of the Stuttgart Ballet - Kang Sue-jin, playing Tatiana, and Jason Reilly, playing Onegin - will dance in three performances of John Cranko’s “Onegin” beginning tonight at the Seoul Arts Center. For Kang, who is also the artistic director of the Korea National Ballet, it will be her final performance as a ballerina in Korea before she retires next summer. [BERND WEISSBROD]

Ballerina Kang Sue-jin says there’s no piece better than “Onegin” for her retirement performance in Korea - her final show here as a ballerina.

Kang, who is currently the artistic director of the Korea National Ballet as well as a principal dancer at the Stuttgart Ballet, announced last year that she will retire as a ballerina in the summer of 2016.

Her retirement will coincide with the 30th anniversary since she joined the prestigious German ballet company in 1986, where she was the youngest ballerina at the time at the age of 19. Her final performance will be in Germany next summer, but she said the three shows of “Onegin” that kick off tonight at the Seoul Arts Center in southern Seoul will be her last ballet performances in Korea.

“‘Onegin’ has always been the piece that grabbed my heart,” Kang said. “Since this will be my last, I think I’ll become more emotional than ever.” 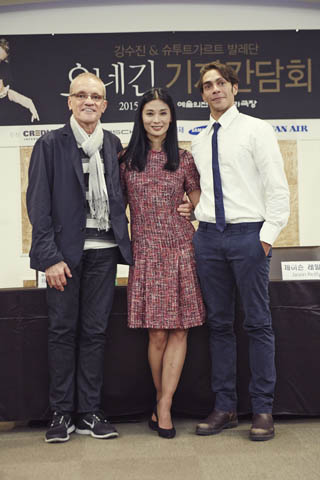 When she presented “Onegin” last time in Seoul 11 years ago with the Stuttgart Ballet, it made a strong impression on the Korean audience, for as the performance came to a close, Kang, playing Tatiana, broke down in tears, wailing loudly.

“I’ve always wanted to end my career as a ballerina with the Tatiana role,” she said, adding that she “fell in love with the piece instantly” the first time she performed it in 1996. In fact, John Cranko’s “Onegin” is the ballet that helped the dancer make a name for herself internationally.

“I’ve been thinking about how to repay the love I’ve received so far from all the people who loved me and my dance, and there’s no other piece I can think of than ‘Onegin,’” Kang said.

About the timing of her retirement, Kang said she is more than certain that she could dance like she does now for a few more years, but said she wants to “retire before it’s too late.”

“What I mean by ‘before it’s too late’ is that since I was young, I’ve always wanted to retire when I could still dance like I want myself to dance and put on the perfect performance I have in my head,” Kang said.

“Perhaps it’s because I have great respect for the work I stage and for myself on stage, as well as the audience who watch me on stage,” she continued. “Unless they see me pulling off a perfect dance, they have no reason to pay for the tickets and come to see the show.”

Reid Anderson, the artistic director of the Stuttgart Ballet who is celebrating his 20th year of running the company this year, said that although Kang will be leaving the company next year, they are “inseparable.”

According to Anderson, Kang is a dancer who has a gift, but also worked at it.

Anderson recalled what the late choreographer Cranko, former director of the Stuttgart Ballet, used to say about talent. “He used to say, ‘Either you have it, or you don’t have it. But you can’t get it, and you can’t learn it. You just have it.’”

“Sue-jin has that kind of thing when she comes on stage,” Anderson explained. “So you win before she even does the steps because she grabs your imagination before she’s actually really done anything. That combined, she’s also very well-disciplined.

“It’s finding that balance between natural physical talent, the natural ability to transform an audience and taking the audience into the ballet,” he added. “Sue-jin is great at that. Whether it’s ‘Onegin,’ which is dramatic, or ‘Taming of the Shrew,’ which is funny, or even modern abstract ballets.

Jason Reilly, a principal dancer of the Stuttgart Ballet who has partnered with Kang many times, will play the role of Onegin for the three shows in Seoul.

According to Kang, Reilly is a “dream partner” for many renowned prima ballerinas, especially for those who are about to retire. Canadian ballerina Evelyn Hart requested Reilly as her partner in “Romeo and Juliet” in 2005 for her retirement performance to wrap up a 30-year career.

“There’s this feeling of being sure in the hands of Jason,” Kang said. “I believe all of us have respect towards Jason from the beginning of rehearsals. No matter what I do, I know that he’ll always be there.”

After this performance, Kang will be focusing on her role as the artistic director of the Korea National Ballet and helping Korean dancers continue to shine in the global scene.

“I thought about doing gala shows together with dancers at the Korean National Ballet after retirement but decided not to,” Kang said. “There are so many great young Korean dancers in the company, and if I go on the stage with them, there’s no space for one of them.”

Anderson also acknowledged the level of Korean dancers, saying that “they are very well thought of and very valued in the West.”

“You can’t go to a very good ballet company without finding a really well-educated, well-brought up, well-mannered Korean dancer,” he said.

“So Koreans must be very proud. I have been fortunate to go around the world, working with different companies teaching Cranko ballets over the last 35 to 40 years, and I see very often really stunning Korean dancers who started off their careers here and went to the West and won competitions, got into good schools and become very important dancers in the world of ballet.