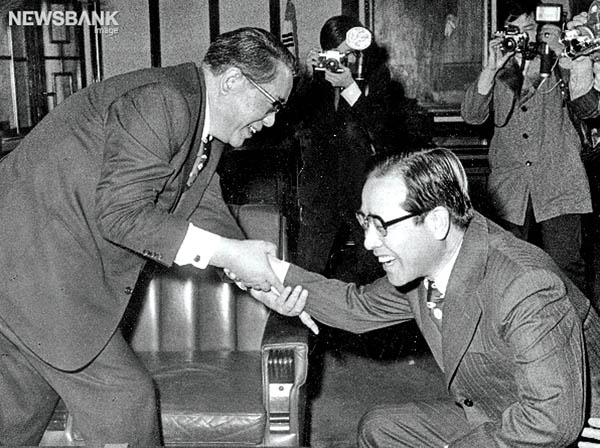 The Yushin era effectively came to an end once Park Chung Hee was laid to rest.

With his 18-year rule abruptly halted, there was no identifiable central authority ready to take his place. No one knew who would step forward to lead the nation. With Park’s absence, the future appeared surrounded by a dense fog.

Under the Yushin Constitution, Prime Minister Choi Kyu-hah became the acting president under the imposition of martial law. But no central power was in place to preside over the military, the government or political affairs. And even though I was a five-term lawmaker, I had little room to exercise my political capacity. 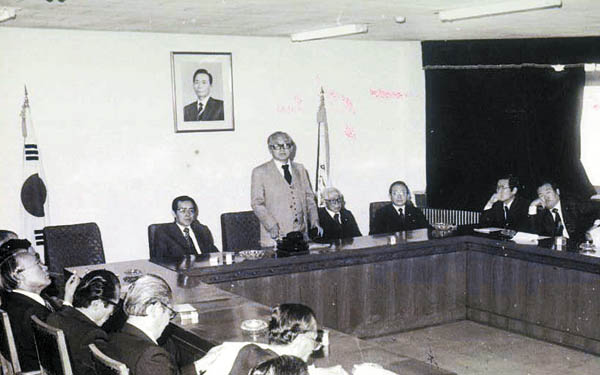 Kim Jong-pil, far left, attends a senior advisory board meeting of the ruling Democratic Republican Party on Nov. 11, 1979, when the party decided that it would not field a candidate for a by-presidential election for an interim government. [Kim Jong-pil]

I was a standing adviser for the ruling party as a sitting lawmaker, but I had no group within the party who would support me in this struggle. At the same time, I couldn’t just walk away from what I had accomplished with Park, my comrade in the May 16 revolution (coup).

We needed to decide who would succeed him ? that was a top priority. Many members of the ruling Democratic Republican Party (DRP) said that I should run for president, but I had no intention to take office under the Yushin Constitution.

The military, which effectively held governing power then, was also deeply suspicious of me. I wanted to take a new role in a new era and on a level playing field.

But having also witnessed Park’s tragic end, I had lost the drive to take his position.

On Nov. 10, the DRP held a senior advisory board meeting to discuss the selection of a party candidate for the presidency. I expressed my objection to choosing a person with a party connection. “It would raise questions about fairness in the selection process if someone from the party were to serve as president in the interim government,” I said. “It will trigger bitter partisan strife and invite public backlash.”

Two days later, I was appointed DRP chairman. Even though I would not run for president for the interim government, I figured it was inevitable that I take the job that nobody wanted, taking into consideration the overwhelming uncertainties about the future.

It was the position President Park once held. He was first elected president in 1963 with the full support of the party. I was overwhelmed and had mixed feelings about taking a position he once occupied.

I laid out a roadmap that detailed how the party should move toward the future, guaranteeing democracy and functioning politics.

But while I concentrated on our next steps, party members from Daegu and North Gyeongsang were deeply suspicious of my move and tried to weaken my authority, wary that my presence and role would undermine their standing.

On Nov. 10, acting President Choi Kyu-hah issued a special address to the nation, declaring he would soon hold a presidential election in accordance with the Yushin Constitution for the interim government, which would be replaced by a new government formed through a new Constitution.

“The new Constitution should be drafted so that a new [presidential] election can take place in the nearest future,” he said.

At the time, Choi decided to run for president for the interim government with the support of the military. The transitional order under Choi would only last about a month, however, until Dec. 12, 1979.

On Nov. 13, I went to Choi’s residence to discuss plans for the future and encourage him to lead a transitional government.

Choi didn’t say much, but given his soft personality and lack of political ambition, I knew he would do as I said.

On Dec. 6, he ran for president uncontested and was made the 10th president of the Republic of Korea through an indirect presidential election under the Yushin Constitution by members of the National Council for Unification, who gathered at the Jangchung Stadium in Seoul.

Two days later, he asked for my advice on how to form the interim government cabinet.

He relied on me in a great deal for policy advice back then. That evening, Economy Minister Shin Hyun-hwak, also a siting lawmaker, called me on the phone and promised he would never leave the DRP. He promised he would maintain his party membership even if he became prime minister.

But he broke his promise overnight.

The next day, he dropped his DRP membership ? a move that left me dumbfounded. Shin said he chose to resign from parliament and the party to concentrate on his responsibilities as prime minister.

He wasn’t the only one who changed. Choi also began to drop hints that the government he was transitionally leading wasn’t really temporary, but the one that would take charge to overcome uncertainties at the time.

To me, it was tantamount to him declaring that he would run the country all the way through to 1984 under the Yushin system.

I knew right away that Shin had influenced Choi. I thought about asking him how long he really thought he could maintain his interim government without a new system, but in the end I refrained.

In his inaugural address, Choi referred to his government as a “crisis management government.” And while he said he believed “a new Constitution could be drafted in about a year pending any major issues,” he did not lay out any specific plans as to when and how the drafting process would be carried out.

All he had to say was that his government would follow through with passing new Constitutional amendments within the National Assembly. But he did not.

I think Shin must have believed that he could take a central role in the government behind President Choi. His change of heart may be a telling sign of the limitations of a human being, so easily susceptible to the temptation of power.

Meanwhile, a new military group led by Chun Doo Hwan was waiting for its time to take advantage of the cracks in the power circle. The Dec. 12 military coup was silently taking shape.

By late 1979, South Korea was on a path whose end nobody knew.