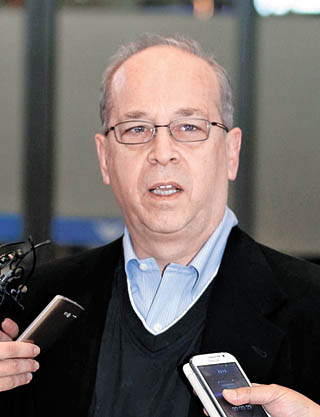 Daniel Russel, the U.S. assistant secretary of state for East Asian and Pacific affairs, said the issue of the comfort women, the Japanese military’s wartime sex slaves, is an urgent one.

“All of us in Korea,” Russel said in a recent interview in Washington, “in the U.S. and Japan feel some sense of urgency.”

On Monday, President Park Geun-hye and Japanese Prime Minister Shinzo Abe held their first summit in Seoul amid tensions over ongoing historical disputes, particularly that of the Japanese military’s forced recruitment of young women and girls into sexual slavery during World War II. The two leaders’ first formal bilateral talks have triggered expectations that some progress may be made on the euphemistically called comfort women issue, especially as Park pressed for some resolution by the end of the year.

Russel sat for an interview with the JoongAng Ilbo and Japan’s Nikkei at the State Department in Washington on Tuesday, where he tackled issues including Korea-Japan bilateral relations, the history row and tensions with China in the South China Sea.

It was his first time conducting a joint interview with Korean and Japanese media outlets, which he jokingly called “the power of the U.S.-Japan-ROK [Republic of Korea] trilateral partnership.”

Q. How do you evaluate the long-awaited Korea-Japan summit earlier this week?

A. First of all, there was a continued and important ongoing dialogue between Seoul and Tokyo throughout this entire period, and there has been a lot of good work and a lot of good progress made throughout the two systems by the foreign ministries, by the defense ministries, by representatives of the leaders. And I think that reflects the tremendous ties that bind Japan and Korea together, most importantly the people-to-people ties. It also reflects the tremendous shared interests and shared values. From where I sit, it seemed very clear that both the Republic of Korea and Japan have a stake in each other’s success and in their joint success.

So it is certainly true that the bilateral summit between Prime Minister Abe and President Park was a long time in the making. I myself was involved in organizing the trilateral summit that President [Barack] Obama chaired in The Hague sometime ago… Everybody knows one meeting isn’t going to solve every problem, but without a doubt, it was an important and positive step forward. Now, based on what the leaders and their top aides have said publicly, I think we know that there were open, direct, candid conversations. Both sides have characterized them as constructive. And it’s certainly our hope that this represents a step ahead in not only the process of reconciliation in dealing with some of the sensitive legacy historical issues, but also will give impetus and momentum to expanded areas of bilateral cooperation, as well as, of course, the good U.S.-ROK-Japan trilateral cooperation that has continued without interruption.

But there has been no agreement on settling the so-called comfort women issue. What does Washington want directly from Japan and from Korea?

Well, we want Japan and Korea to find a way that is politically viable in both of those two countries to ensure that the issues of the past don’t limit the possibilities for the future. We see two close allies, two important democracies, two of the most significant economies in the region, if not in the world. And where we come out is with the conviction that the global economy is too fragile and the challenges before us too serious for Japan and Korea to operate at less than full capacity as partners and democracies. So we want to see a path forward that is set not by us or others but by the two leaders themselves, as to how the sensitive historical issues can be resolved, once and for all. I took note of the public statement by Prime Minister Abe that he wants to ensure that these legacy issues don’t continue as obstacles that burden future generations. That’s an important and I think a constructive approach.

Japan insists the comfort women issue was settled through the treaty normalizing bilateral relations between Seoul and Tokyo in 1965, but would consider humanitarian assistance. But Korea insists Japan should admit government responsibility. Which side is right?

It’s not for me or for the United States to adjudicate which side’s view has greater merit. The essence of compromise is that the leaders of Japan and the leaders of Korea need to find a way that is consistent with their own traditions and consistent with their own public opinion and politics that will cement the progress that’s been made and the bonds between the two countries. Now, there is a broad area of consensus already between the two governments, and I believe that through the ongoing dialogue, Japan and Korea have made considerable headway in thinking through what will work in both countries, by way of putting to rest once and for all the difficult and the sensitive issue of the comfort women… We all recognize that in this anniversary year, the 50th anniversary of your bilateral relations, given some of the very positive momentum that has been steadily built throughout the year, there is a real opportunity to make an historic breakthrough.

Do you think this comfort women issue will be resolved within this year?

Well, this is a problem that has been haunting the Korea and Japan bilateral relationship and, to some degree, Japan’s relations with other neighbors for a long time. And we shouldn’t look to the calendar for milestones. Milestones are created through dialogue at the political level. And whether that’s through direct dialogue such as occurred in Seoul or whether it’s through senior aides and officials who conduct diplomacy - that’s my line of business - the point is that each step needs to build on the previous one in creating greater trust and greater certainty. That means the Japanese side needs to be confident that when an agreement is ultimately reached, it will be an enduring agreement and this will not be an endlessly recurring challenge. On the Korean side, I think it means that there has to be faith on the part of the Korean public that Japan is sincere in its expression of remorse for events that took place more than 70 years ago.

Is there concern that Korea is leaning more towards China?

North Korea only has one friend or an approximation of a friend - China. And that friend has, we think, appropriately been showing some pretty tough love. From our point of view, every step forward in the bilateral relationship between Beijing and Seoul is a positive step because all of us want to see North Korea move closer to South Korea. And the strengthening of the bilateral relationship between China and the ROK, I think, can be very helpful in that regard.

Now, I know that when President Park went to Beijing and attended the military ceremonies, that when she watched the parade of the Chinese army, she has to have thought, “These are the people that attacked and killed my countrymen. They didn’t fight the Japanese, they fought us!” And I’m sure that generated conflicting feelings in her mind.