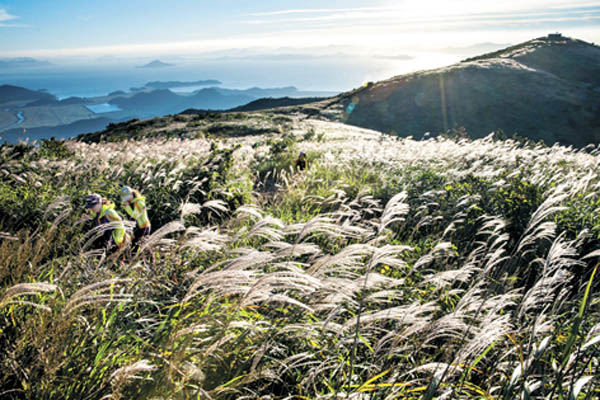 Mount Cheongwan, located in Jangheung County, South Jeolla, is a famous silver grass destination, but it is also dotted with unique large rocks and offers picture-perfect views of the southwestern sea. [JOONGANG ILBO]

November is surely not the best time to take a trip. Trees and flowers begin to wither, and the dropping mercury discourages people from packing up and leaving home.

November is also an unlikely time for travel. It is too early to go skiing or snowboarding, and a little late to go see fall foliage or autumn flowers such as chrysanthemums and cosmos.

But silver grass and silver reeds give a good excuse for those with itchy feet to hit the road.

Silver grass and reeds begin to bloom starting in late September, and they reach full bloom when the temperature drops further from late October to mid-November. The colder the temperature is, the more beautiful the plants become.

In addition, silver grass and reeds look different depending on the sunlight. They look creamy white in broad daylight but then turn to gold under the setting sun.

Despite their similarities, silver grass and silver reeds are different plants.

The reeds grow only near water, while silver grass is found on any terrain. The reeds are much taller and have much fluffier flowers than silver grass, too. 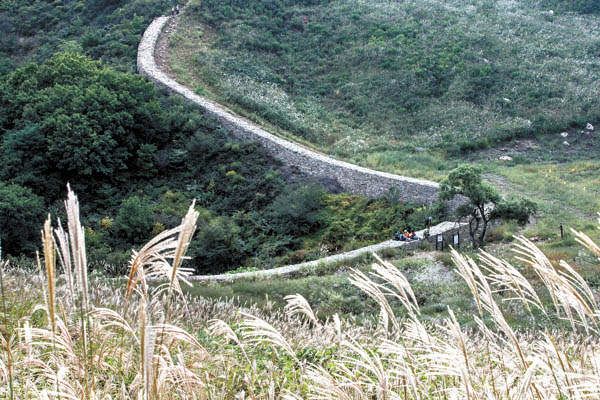 Due to the differences between the two, possible destinations vary depending on which one you want to see this fall.

To see silver grass, it’s best to go hiking, while wetlands are the best destination for viewing silver reeds.

Mindungsan, or mindung mountain, is a commonly used term to refer to a bare mountain.

In Jeongseon County, Gangwon, however, the term is used as a proper noun.

Mount Mindung once had no trees at all because villagers used to set fires on the mountain to clear land for farming up until the 1970s. Even a government-led reforestation project did not work to bring back the trees.

Today, the mountain has few trees but is covered with silver grass, which takes root and spreads in barren spaces. And since 1996, Jeongseon County began holding an annual festival dedicated to the grass and planting more.

The most basic hiking course on Mount Mindung starts from Jeungsan Elementary School and ends at Balgudeok. The course takes between two to three hours and is appropriate for the whole family, for the entire course is quite flat.

At one point of the trail, hikers can’t even look around because the tallest silver grass stands up to 2 meters (6.6 feet) tall.

To reach Mount Mindung by car from central Seoul takes between two to three hours. It is also possible to get there by taking a train from Cheongnyangni Station in Seoul to Mindungsan Station. 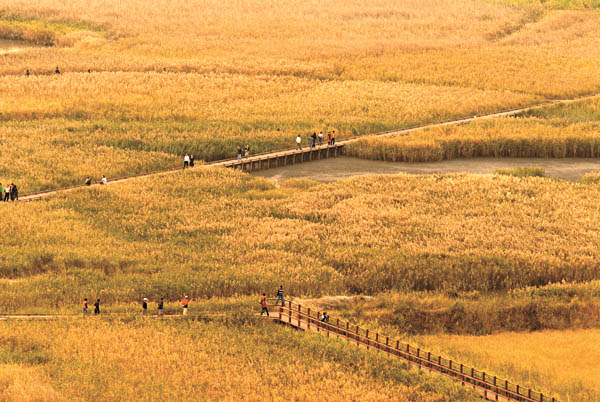 Decades ago, Mount Cheongwan in Jangheung County, South Jeolla, didn’t attract many visitors because the mountain had no trees at all.

Winds off the nearby Dado Sea blow too harshly to allow anything to grow on the mountain, and the mountain’s rocky terrain is too difficult for ordinary hikers.

But now the mountain has stolen the spotlight with its combination of unique rocks and endless silver grass, which were once considered nuisances.

The panoramic views of the southwestern sea with its many small islets is another draw for those who visit the mountain.

The best time to go hiking on Mount Cheongwan this time of year is around 9 a.m. or 5 p.m. because the silver grass shines white in the morning sun and is tinged gold in the setting sun of the afternoon. 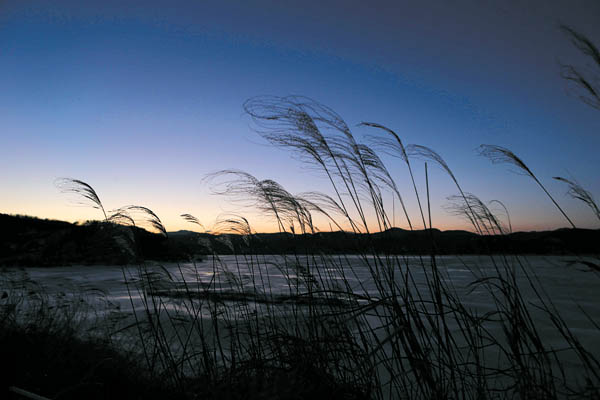 The Upo Wetland reed fields are not as sprawling as the others, but the natural wetlands formed millions of years ago are still worth visiting. JOONGANG ILBO

There are more than 10 pathways up the mountain, but the best way is the Jangcheonjae course. It starts from Jangcheonjae and ends at Yeondae Peak.

Jangcheonjae is a wooden building that was constructed during the Joseon Dynasty (1392-1910) by a man who wanted to pay tribute to his mother.

The course takes about two hours and 30 minutes and is recommended for those who want to enjoy all that Mount Cheongwan has to offer: rocks, silver grass and picture-perfect views of the Dado Sea.

The Yeongnam Alps refer to the mountainous area encompassing nine mountains that stretch from Gyeongju, North Gyeongsang, to Ulju County in Ulsan.

All nine mountains stand 1,000 meters above sea level, and they offer views that are comparable to that of the Alps in Europe.

Professional hikers jokingly began to call the area the Alps of Yeongnam, and now the term has become a proper noun.

The mountains in this area are steep and harsh. During the Joseon Dynasty, Korean Catholic believers secluded themselves in the mountains to avoid persecution, and North Korean partisans settled down in the area after the 1950-53 Korean War.

The hiking is difficult, but it is worth it during this time of the year.

Of all the mountains, Mount Sinbul makes Yeongnam Alps the country’s No. 1 silver grass destination.

Mount Hwawang in Changnyeong County, South Gyeongsang, is a volcanic mountain. Because of this, there is a crater at the peak, which is where silver grass grows.

Since the hiking course to the peak is not that hilly and includes forest trails, the mountain is recommended for family visitors including children and seniors.

While walking up the mountain, hikers will encounter the old walls of Hwawang Fortress. The fortress is estimated to have been built during the Gaya confederacy (A.D. 42-532).

The largest habitat for silver reeds is located in Suncheon, South Jeolla. Across the 1 million-square-meter (250-acre) field, all there is to see is reeds.

Suncheon Bay offers spectacular views any time of year, but if you’re not able to visit the bay in every season, now is the best time to visit.

The silver reeds bloom starting in September, but fluff begins to come out when the temperature drops in mid-October.

In order to experience the vast field of reeds, you should head to the Suncheonman Bay Ecological Park.

The park opens at 8 a.m. and closes at 5 p.m. during the fall and winter season.

Famed poets such as Kim Chun-su and Na Hee-deok wrote poems after watching the sunset at Suncheon Bay.

When river water flows into the sea, the speed of the water slows down, and the river water leaves behind sand and soil. Sinseong-ri in Seocheon County, South Chungcheong, is where the Geum River meets Korea’s West Sea. The area is home to few creatures except endless fields of silver reeds because the saltwater prevents other plants from growing.

The reeds, on the other hand, grow well in saltwater.

The field was not well-known until it was featured in popular drama series and films.

If you stand in the middle of the vast reed field, it feels like you are on a remote alien planet.

When the wind blows, the reeds brush against each other to create a unique sound that entertains visitors, too.

Another sightseeing place near Sinseong-ri is the mouth of the Geum River, which is home to migratory birds such as whistling swans and mallards. About 100,000 birds of 40 species spend winter there until the end of February.

The mouth of the Geum River is located about 10 kilometers away from Sinseong-ri.

The silver reed field of Upo Wetland is not as large as the others, but it is still worth visiting the country’s largest natural wetland, which was created about 1,400 million years ago.

The wetlands, located in Changnyeong County, South Gyeongsang, are on the Ramsar List of Wetlands. The Ramsar Convention was signed in 1971 to preserve wetlands.

The best way to tour the prehistoric swamp is by bicycle, which can be rented by the entrance.