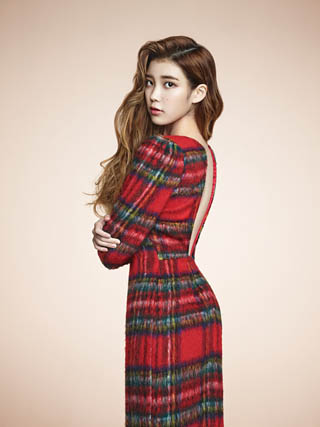 Singer-songwriter IU once again came under fire for reinterpreting Zezé, a five-year-old protagonist of the novel “My Sweet Orange Tree,” in sexual ways for one of the tracks from her recent album “Chat-Shire.”
The controversy first began with an online post uploaded by local publisher Dongyok on Thursday. Dongyok, which published the Korean version of the novel, wrote, “Zezé is a child who is abused by his own family. People are able to interpret literature in their own ways, but we feel very sorry for [IU] seeing Zezé in that way.”
The 22-year-old singer-songwriter wrote lyrics for “Zezé,” a track that was reportedly inspired by Brazilian author José Mauro de Vasconcelos’ work.
The novel depicts the growth of Zezé, a mistreated boy, as he talks to an orange tree and seeks comfort from it.
But IU’s lyrics go: “You [Zezé] are pure, but you are sly. You look like a young child, but you are filthy.”
The publisher also raised a question about the album’s cover. The illustration shows a little boy wearing fishnets and raising one of his legs into the air while sitting in front of a tree.
“Zezé wears fishnets and poses like a pin-up girl. There are plenty of sexual and commercial factors,” the publisher added.
Many Internet users left comments on the web saying that IU “has disgraced Zezé.” They also said IU should apologize for interpreting the literature with such lyrics.
“My Sweet Orange Tree” is an autobiographical novel of Vasconcelos, and the book is considered a must-read for many Korean students.
With the controversy, some music fans have begun to make an issue of IU’s “Twenty-Three” music video. They said the video has many sexual innuendos. In one scene, IU sucks on a nursing bottle and the spills the milk over a doll.
Responding to the controversy, IU uploaded a post onto her Facebook account Friday. “It took me time to gather up courage [to comment on the issue] … I swear I didn’t mean to interpret a 5-year-old boy in sexual ways. And Zeze in my lyrics is the third character I created based on Zeze from the novel,” she wrote.
The singer continued, “There were many mistakes in this album, which I produced for the first time. I apologize for those who are disappointed in me.”
IU has also been criticized recently for illegally sampling Britney Spears’ 2007 song “Gimme More” on a bonus track that is also titled “Twenty Three.”
By Sung So-young