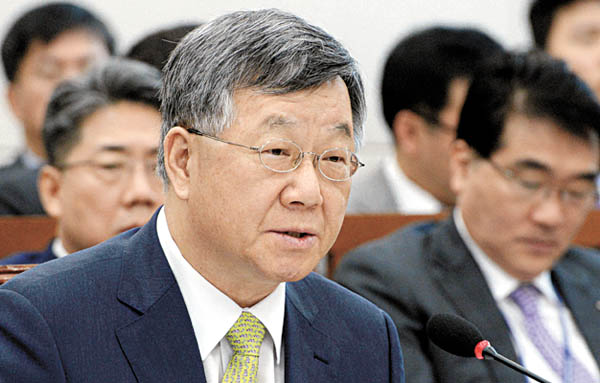 Ahn had a year left in his term, which ends in December 2016. He resigned for personal reasons, according to the KIC, the nation’s sovereign wealth fund.

In 2012, while he was serving on Park Geun-hye’s presidential election campaign, Ahn made a Twitter post that accused the late President Roh Moo-hyun and then-presidential candidate Moon Jae-in of being pro-Pyongyang figures.

That Twitter post and 9,739 more came up during a parliamentary audit of the KIC early last month.

Members of the National Assembly Strategy and Finance Committee from the opposition New Politics Alliance for Democracy (NPAD), which is led by Moon, demanded Finance Minister Choi Kyung-hwan ask the Blue House to sack Ahn for making political comments.

The Busan native, who began his career as a Finance Ministry official, acknowledged that he was pressured by Choi and Senior Presidential Secretary for the Economy An Chong-bum to resign when questioned by a liberal lawmaker during an audit session. At that time, he refused to resign.

At the audit last month, Ahn was also criticized for poor investment decisions and administrative actions in managing the sovereign wealth fund.

The KIC decided to acquire shares of the Los Angeles Dodgers last year, and Ahn aggressively tried to seal the deal earlier this year by meeting with the club’s management, although the club is known to be losing money.

The deal was scrapped in June, but Rep. Park Won-seok of the opposition Justice Party criticized Ahn’s pursuit of the deal and his managing of the negotiations.

Ahn was also criticized for his salary. Last year, he received an annual salary of 475 million won ($416,000), the highest among 310 CEOs of state-run institutions. His salary was nearly 2.7 times larger than the 310 CEOs’ average salary of 150 million.

The KIC is nicknamed one of God’s workplaces for offering top-notch salaries. Its average salary last year was 110.3 million won.

Kim Young, chief operating officer at KIC, will serve as acting chairman until the Ministry of Strategy and Finance picks the replacement through recommendations for candidates.