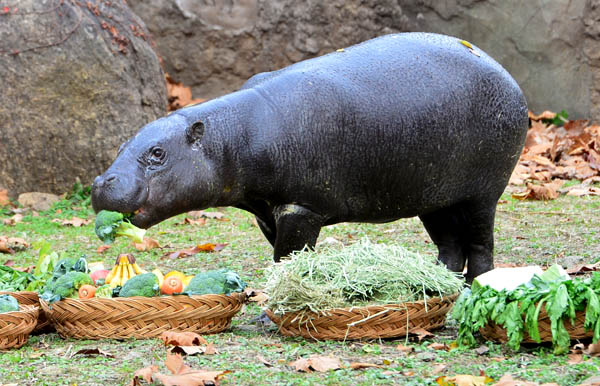 Namong, a female pygmy hippo from the Colchester Zoo in England, makes her debut at Seoul Grand Park Zoo. [NEWSIS]

A 3-year-old female pygmy hippopotamus from the United Kingdom made her debut Friday at the Seoul Grand Park Zoo.

The hippo, named Namong, is currently on loan from the Colchester Zoo in Colchester, England.

Pygmy hippos measure about 1.5 meters (39 inches) in length and are miniature versions of full grown hippopotamuses. Full-sized adult males can weigh up to 1,500 kilograms.

They are categorized as an endangered species, with just some 3,000 left worldwide, and are mostly found in swamps and forests in countries in West Africa.

Namong will serve as a companion and potential mate for Hamong, the zoo’s resident male pygmy hippo, whose original mate died in 2013.

The two hippos will live together in the same enclosure.

The park officially announced new names for the animals on Friday, which were selected in a contest hosted in August by the Seoul Metropolitan Government.

About 4,000 people participated in the competition.

Namong was found thanks to Switzerland’s Zoo Basel, which wanted to keep hippo populations robust. It brought the two zoos together.

An online crowd-funding campaign organized by a local youth club and a university student society publicized the campaign to find a friend for the zoo’s lone male pygmy hippo. It raised a total of 4.3 million won ($3,780), which will be used to construct a bench around the hippo showroom.