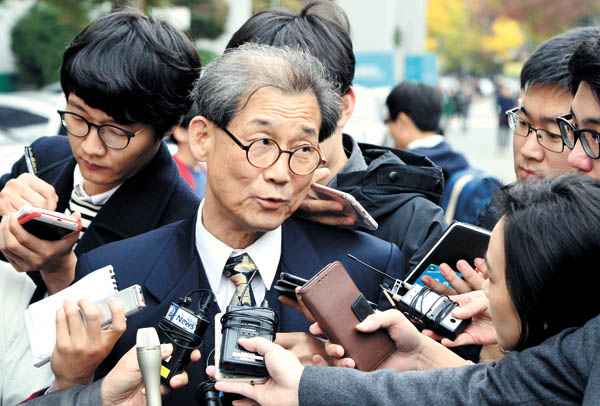 Choi Mong-lyong, an emeritus professor of history at Seoul National University, speaks to journalists in front of his residence on Friday. Choi quit the government’s team writing new history textbooks over a drunken scandal. [NEWSIS]

A veteran historian leading the state-authored history textbook program quit two days after his appointment, over allegations that he had acted inappropriately with female reporters while drinking.

“I decided to resign to take responsibility for the trouble I caused,” Choi Mong-lyong, an emeritus professor of history at Seoul National University, told reporters outside his residence Friday afternoon.

The allegations were touched off by a report in the Chosun Ilbo on Friday that Choi made some remarks and indulged in some kind of physical behavior that sexually offended female reporters, one from the Chosun, who were having drinks with him at his house in Yeouido, western Seoul.

Reporters visited Choi at his house Wednesday evening, just hours after an announcement that he was selected as one of the lead authors in the controversial state-authored textbooks. They drank with him and some of his former students.

The 69-year-old professor denied on Friday that he had physically touched reporters, but acknowledged he was drunk and made some jokes. Later in the day, he expressed his wish to resign from the panel of authors. In his resignation, Choi said he didn’t want to be a burden on the team of writers.

In fact, Choi did not show up at the press conference Wednesday afternoon announcing his part in the program because he knew how controversial his appointment was. In interviews with the local media before his Friday resignation, Choi said he had received angry calls from former students and colleagues over his decision to take part.

Choi studied at Seoul National University and Harvard University and returned to his Korean alma mater in 1981 to teach history until 2012. A former head of the Korean Ancient Historical Society, Choi participated in writing history textbooks for high school students for 23 years from 1998 to 2011. If he stayed on the panel, he would have covered ancient Korean history.

Choi’s abrupt resignation from the team of six lead authors for the highly contentious project by the Park Geun-hye government came only two days after his appointment was announced by the National Institute of Korean History and three days after the Park government formally declared it was taking back state control over history textbooks.

The opposition New Politics Alliance for Democracy was quick to link Choi’s scandal with its criticism of the textbook project, blaming the government’s irrational and reckless drive for state-authored textbooks in a statement on Friday.

The government’s plan for state-compiled textbooks, to be used in middle and high schools starting in March 2017, has elicited a backlash from liberals, historians and the political opposition. Critics also say advanced democracies have no need for such state-authored history textbook system.

The government, on the other hand, contends that current history books have leftist and pro-North Korea views, while downplaying the economic and political achievements of South Korea over the past 70 years.

The country’s largest history group, the Korean History Research Association (KHRA), announced it would start authoring its own history textbook as an alternative to the state-penned book. The 700-member association said on Friday that it planned to author a Korean history book to “counter” state-penned textbooks, adding a list of authors.

The KHRA declared last week that it would boycott the state-authored textbooks program.

A coalition of civic groups will stage a rally today around Gwanghwamun Square to protest state-authored textbooks. The rally is expected to draw more than 2,500 protestors, which was the number of protestors at a rally last Saturday.

Meanwhile, police said on Friday that they will take stern legal actions against those making threats to textbook authors.

“We will track down all suspects,” the police said in a press release.

The police said they will provide protection if authors are threatened and request it.