MLB team puts in the top bid for Heroes’ Park

MLB team puts in the top bid for Heroes’ Park 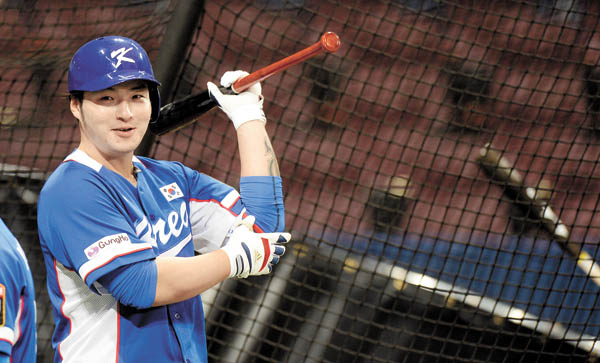 
The Nexen Heroes announced on Saturday that it had accepted a $12.85 million bid from the Major Baseball League (MLB) for first baseman Park Byung-ho.

The question now is: Which team was it?

The Heroes’ decision came after the Korea Baseball Organization (KBO) notified the Seoul-based club with the results of the bids submitted.

The MLB commissioner’s office will provide the details to the KBO, who will then inform the Heroes about the winning bidder.

The Heroes said the MLB team will be disclosed Tuesday morning at the earliest.

The bid for Park is the second-highest for an Asian infielder, after Japanese outfielder Ichiro Suzuki was snatched up for $13.12 million by the Seattle Mariners in 2000.

The bid for Park is more than double that for his former teammate, Kang Jung-ho, for whom the Pittsburgh Pirates paid $5 million last year.

“I was surprised that [the price] was higher than my expectations,” said Park, who is currently playing on the Korean national team in the Premier 12 tournament. “I’d like to thank Nexen for accepting the bid.”

According to U.S. media, at least 12 clubs submitted bids for the 29-year-old first baseman.

Over the weekend, American news outlets were able to eliminate some of the possible contenders.

Those included the Texas Rangers, the Baltimore Orioles, the Cleveland Indians, the Boston Red Sox, the Detroit Tigers, Oakland Athletics and the San Diego Padres.

While speculation has mounted that the St. Louis Cardinals are likely the winner, industry analysts have insisted that the teams most likely to have made the offer are those most in need of a power-hitting first baseman.

Park is the first player in the KBO to lead in home runs and RBIs over four consecutive seasons.

The highest-bidding MLB team has the exclusive right to negotiate with Park for a 30-day period.

The former LG Twins player has already signed with Octagon Worldwide, the same agency that negotiated Kang’s four-year deal with the Pirates, to represent him.

The Heroes can pocket the $12.85 million once Park finalizes an agreement.

If the two-time Korean MVP fails to sign a contract within 30 days, he cannot be posted again until Nov. 1, 2016.

He would then have a choice of starting talks with interested teams in Japan’s Nippon Professional Baseball (NPB) or staying with the Nexen Heroes.