It takes more than two hands to count the number of food shows that are airing across major broadcasters and cable channels. The list goes on and on: “Wednesday Food Talk” and “Home Cooked Meal, Baek Teacher” on tvN; “Tasty Road,” “What Shall We Eat Today?” and “Bibeop” on O’live TV; “Gourmet Road” on K Star; “Finding Delicious TV” on MBC; and “Please Take Care of My Refrigerator” on JTBC. 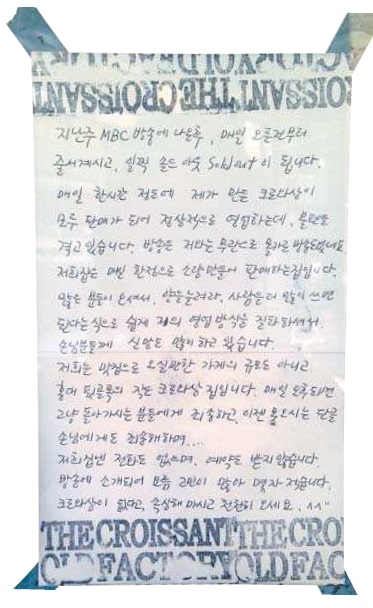 A hand-written note written by Yang Yun-sil, the owner of Old Croissant Factory, located in Seogyo-dong, western Seoul, posted on the door of the bakery. After the place was featured on TV, people began to line up an hour before opening and the croissants were sold out in an hour. In response, the owner decided to shut down the bakery for more than a week for the first time in five years, leaving the note to customers on the door. [HONG JOO-HEE]

In addition to these TV shows, other weekly and daily programs such as “Power Magazine” on MBC and “VJs on the Scene” on KBS also allocate much of their airtime to introducing eateries. Simply, it is hard to avoid seeing a food show as long as the TV is on.

Some of these TV shows are credited for initiating in-depth discussion of cuisine, but the food show craze is also taking a bite out of many restaurants and their loyal customers.

Old Croissant Factory, a small bakery located in Seogyo-dong, western Seoul, shut down for more than a week last month, leaving behind a note on the door. 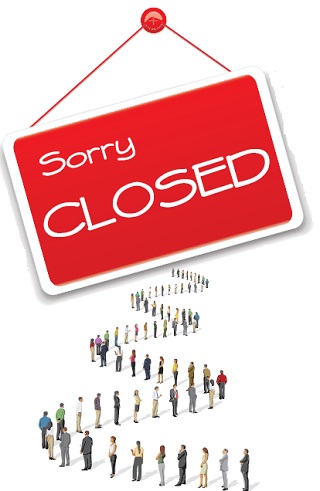 The hand-written note written by the bakery’s owner, Yang Yun-sil, read: “We’re just a small bakery located in a back alley near Hongik University. I’m so sorry for those who leave the bakery with empty hands and I also feel sorry for regulars who can’t visit our bakery…”

The bakery has been operating for more than five years in the Hongik University area, where many restaurants come and go and many of them shut down less than a year after opening due to tough competition, but the bakery recently closed its doors for the first time after being featured on “Finding Delicious TV.”

A host from the TV show visited the bakery as if he was one of customers, and introduced the place on TV without permission from Yang.

After the TV show aired, people began to line up an hour before opening, and all the croissants were being sold out in an hour.

Some people who traveled a long way to visit the bakery would pound on the door even after the bakery was closed and yell at Yang to hire more employees to meet customer demand.

Yang, who bakes all her goods by herself, said, “I admired small shops in Japan.” Because of that, she bakes only a small quantity of croissants every day.

With a slew of new customers pouring who were unhappy with Yang’s business philosophy, Yang said, “I was disappointed with some people who think they are entitled to get anything they want once they pay. I also felt like shutting down my business for good at one point.”

Johnny Dumpling, a famous dumpling place in Itaewon-dong, central Seoul, also temporarily closed its first and second branches in September after it was introduced by a cable TV food show in August.

Even before it was featured on the show, there was often a line of people outside the place, which is included in the Zagat Survey.

TV food shows sometimes bring much-needed attention to struggling yet decent restaurants, but they do not always work magic for businesses.

Chinese restaurant Mokran located in Yeonhui-dong, western Seoul, is fully booked until the end of this month, largely thanks to the soaring popularity of the owner and chef, Lee Yeon-bok.

After Lee began appearing on “Please Take Care of My Refrigerator” as a regular guest, the restaurant, which already has loyal customers, became a new hot spot.

Since it is almost impossible to secure a seat at the restaurant, some bloggers have shared tips on how to get a table. They even recommend calling the restaurant at least 100 times.

But the TV fame has not helped the restaurant rake in more money, although the phone now rings off the hook and the parking lot is always full.

Before Lee began appearing on the show, the majority of Mokran’s customers ordered course menus, which cost up to 50,000 won ($44) or 60,000 won for a single person. On the other hand the new diners tend to order less pricey a la carte items, such as jjajangmyeon (noodles with black bean sauce) and jjambbong (spicy noodle soup with seafood).

Lee has told multiple TV shows that the restaurant used to earn 100 million won per month on average, but sales have dropped to 80 million won.

However, business has reportedly stabilized in recent months.

“Many of the new customers who have been waiting for their turn for so long order course menus because they want to enjoy more food,” Lee said.

Industry insiders said Mokran could easily get back on track because it knows how to deal with the changes, thanks to years of skillful management, but it would be impossible for other similar eateries to deal with such chaos.

Besides Lee’s restaurant, an Italian restaurant has also reported having similar troubles.

Its main source of income comes from course menus, often paired with bottles of wine, but the restaurant has been getting more new diners who order a la carte after appearing on a TV show.

Overall sales have dropped, but employees have to work more and longer hours. Regular diners now say they are disappointed by the quality of food and service.

According to some chefs, the overall quality of food and service is inevitably downgraded when a restaurant is featured on a TV show.

“If a restaurant becomes busy, it can’t focus on food,” said Kang Min-goo, the owner and chef at Mingles, a fusion Korean restaurant located in Cheongdam-dong, southern Seoul.

Kwon Woo-jung, the owner and chef at Korean restaurant Kwonsooksoo, explained, “Running a restaurant is almost like running a marathon. You have to keep your own pace. Otherwise, you can’t produce quality food.”

“In order to maintain a certain quality, the restaurant has to put a limit on the number of diners,” he continued. “I feel like these TV shows simplify the dining culture. Taste is very subjective, but if the show says this is the best food ever by providing limited information about certain food, it may deprive people of the chance to try other food.”

Kim Hye-jun, a former chef and a professor in the baking department at Incheon Culture and Art College, said, “It seems like we are in a time of transition. Instead of focusing so much on tasty and cheap food, TV food shows should deliver information on how to enjoy food with appropriate manners.”

Another chef who wanted to remain anonymous said, “People don’t seem to appreciate food, but they are kind of obsessed with the act of eating itself. Because people approach food this way, they say you should come up with a 10,000 won menu if you want to be featured on a TV food show.”

A swarm of new customers may drive up rental prices, too.

Lee from Mokran said on multiple TV shows that he has seen his monthly rent rise several times since he began appearing on the small screen.

As for the reason behind the rise in food shows, weekly economic magazine The Economist recently ran a story on the trend with the headline “The Food-Show Craze.”

The article noted that the obsession comes from the “widespread unhappiness amid the country’s economic doldrums.”

Koreans may not be able to afford expensive meals out, but the omnipresent TV food shows provide “a feast their eyes, at least,” the magazine added.