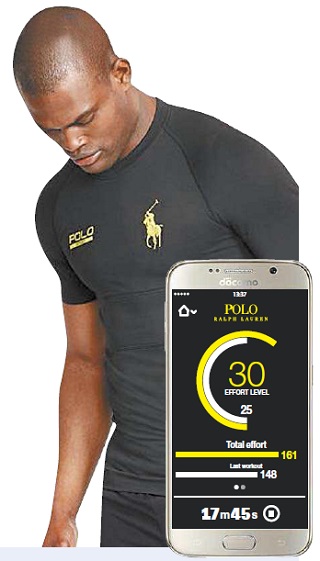 Clothes aren’t usually communicative, but the growing smartwear market might give some garments a voice - literally.

By gathering biometric data from the wearer’s body, new items of clothing might be able to detect everything from weight gain to mood, giving nudges accordingly.

Whether or not people want their pants encouraging them to exercise is another story, but several companies are coming up with innovative ways for clothes to do everything from measuring heart rates to paying for coffee off the cuff.

One example, developed by outdoor brand Black Yak, is a winter jacket that automatically manages the temperature and humidity of the wearer, and also includes a GPS system so he or she never gets lost. The “YAK ON H” was released this month and includes a heating textile in the back, along with a connecting device that links the jacket with the wearer’s smartphone to manage temperature and humidity, according to a company official Monday. 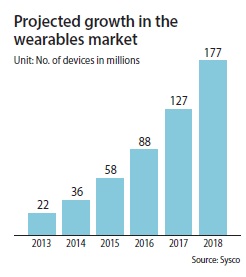 “The jacket will aid customers who want to enjoy outdoor activities in the cold winter,” said Park Jung-Hoon, a managing director at Black Yak.

The heating textile, named “Heatex,” was first introduced by Kolon Glotech in 2008. The materials manufacturer printed an electronic circuit onto a textile, which becomes warm when an electrical current is applied. The technology was first introduced in the “lifetech” jacket from apparel brand Kolon, which could heat between 35 degrees and 50 degrees Celsius (95-122 degrees Fahrenheit).

“From the late 2000s, heating textiles started to emerge in domestic markets and those new materials are bringing changes to the nation’s fashion industry with growing interests in wearable computing and display,” explained an official in the smartwear industry.

According to Sysco, a United States information technology company, the global wearable market - which includes all devices, from bracelets and watches to clothing - will grow to 177 million in number by 2018, eight times larger than the 22 million recorded in 2013.

While the wearables market now encompasses many different products, companies are increasingly interested in smartwear.

“Growing concerns about health management has led to an increasing number of people wanting to check their lifestyle habits and vital signs,” said Kim Jin-hee from the Korea Trade-Investment Promotion Agency (Kotra). According to Strabase, a specialized IT market research firm, “Smartwear that monitors users’ vital signs and health data in real time through sensors attached to clothing will be a leader in the wearable devices market.”

Smartwear is also emerging in foreign markets. One representative product is the “Polotech shirt” released by Ralph Lauren’s Polo brand in August.

The middle of the shirt contains a measuring device made out of a special textile, which measures heart rate, breathing rate, stress levels, distance traveled and intensity of exercise. The data collected is recorded in the shirt, which can then be transferred to a smartphone via wireless connection. It costs $295.

Lyle & Scott, a British fashion brand, joined with British Credit Card Company in September to roll out a new smart jacket with a wireless payment chip installed in the cuff, eliminating the users’ need to remove their wallets from their pockets. The so-called Contactless Jacket costs $250.

While fashion companies are focusing on attaching electronic textiles and mini-chips inside clothing, textile companies are working on inventing new materials altogether.

Toray Industries, a leading Japanese materials developer, made headlines when it announced the development of “hitoe,” a carbon fiber stronger than most metals, in collaboration with telecom provider Nippon Telegraph and Telephone (NTT) last January. The material can notify the user of his or her heart rate, among other heart measurements, and its functionality lasts long after a trip through the washing machine.

Toray also proposed a collaboration with NTT’s affiliate DoCoMo, a mobile carrier, to bring the health care capabilities of its technology to users’ smartphones.

“Nanofiber fabric, a cutting-edge textile coated with high electroconductive plastics, enables the measurement of biometric signs from the body in a simple manner,” explained a spokesman from Toray. According to an official related to the company, it has developed the material in a way that can stretch, making it particularly suitable to clothing that has to adapt to bodies of different shapes and sizes.

According to information from Kotra, Obayashi Corporation - one of the biggest construction companies in Japan - announced plans to produce employee work uniforms using the hitoe material to improve worker safety at construction sites.

“The smartwear could prevent accidents at the sites by detecting the worker’s body heat, stress and fatigue prior to perilous situations,” Kotra said.

Teijin, a Japanese chemicals company, has also jumped into the market. Its flagship product is a so-called piezoelectric fiber developed in cooperation with Kansai University, which changes pressure applied to the clothing into an electric signal, allowing the wearer’s motions to be reproduced on a computer.

Another area in development is batteries that can be installed on clothing. Samsung SDI recently introduced the “stripe battery,” which can easily bend and change form. For now, the battery can be utilized on necklaces, hair bands, or simply be attached to wearable clothing or hats. But industry insiders are foreseeing new batteries in the form of a textile or fabric.