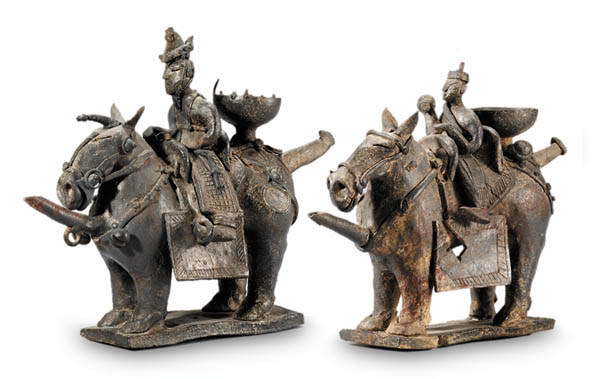 This pair of earthenware funerary objects - shaped like a warrior on horseback - were excavated in 1924 along with a boat-shaped ceramic vessel from an ancient Silla tomb now called Geumnyeongchong (“Tomb of Gold Bell”) in Gyeongju, North Gyeongsang.

These funerary vessels are known to have been buried in the tomb to guide the spirits of the dead safely to the other world through land and water.

Both warriors are seated on the back of rather stocky, relatively short-legged horses standing on a rectangular base.

Each has, behind the warrior, a comparatively large-footed cauldron with a hole used for pouring water and a tubular spout that projects from the chest of the horse.

The noble rider is in full battle gear as a cavalryman, complete with pointed headgear and mud guards. His attendant wears a thick headband with a topknot showing, and he has a naked upper body, a light load carried on the back and a bell held in the right hand.

The two ewers are regarded as very valuable heritage items providing a wealth of knowledge on the perception of the afterlife prevalent among the people of Silla as well as clothing, weapons, horse trappings and accessories.

Name: Earthenware Funerary Objects in the Shape of a Warrior on Horseback