Another minister offers to resign

Another minister offers to resign 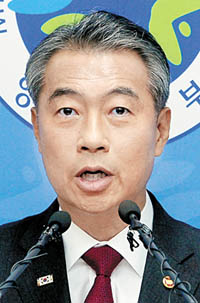 Minister of the Interior Chong Jong-sup offered to resign Sunday, saying he didn’t want “ongoing speculation” about his future plans to get in the way of state affairs. The announcement, made during what he called an “urgent press conference,” was a likely indicator that the 59-year-old will run in next April’s general election.

Although Chong did not explicitly say he would run, he left the possibility open, telling reporters he would “decide prudently [on that matter] after hearing opinions from several people.”

Domestic election law stipulates that a minister must resign from his or her post 90 days before the polls. The deadline for the April general election is Jan. 14.

If the Blue House accepts Chong’s resignation, he will be the latest minister to leave the Park Geun-hye administration less than a month after Park replaced two ministers on Oct. 19. Former Land Minister Yoo Il-ho and Maritime Minister Yoo Ki-june were two of five lawmakers from the ruling Saenuri Party serving as ministers in her Cabinet and they are expected to run in April.

Chong, a former law professor at Seoul National University, has never served as a lawmaker.

“I’ve noticed people were talking about my next step,” Chong said Sunday during the press conference. “I thought it would only be right for me to step down at this time because when considering government administration, it’s not right [to work with that kind of speculation].”

Local media expects Chong to run for the Saenuri Party, especially after an August controversy when he wished the ruling party victory in the next general election.

During a dinner meeting with Saenuri Party lawmakers on Aug. 25, he proposed a toast, saying, “General election!” Representatives were prompted to follow up with the phrase, “Wish for victory!”

Despite an apology, the main opposition New Politics Alliance for Democracy (NPAD) demanded he step down for breaching the political neutrality required of government workers, including ministers. Chong, at that time, refused to resign and flatly denied any plans to run in the general election.

Rumors in political circles say Chong may try to run for a seat in his hometown, Gyeongju, North Gyeongsang, or in Daegu, where he graduated from high school.

A source from the Saenuri Party with knowledge of Blue House affairs told the JoongAng Ilbo that if Chong runs for a seat for the Saenuri, the party would decide the constituency after strategic discussions among its members.

Various sources from the Blue House told the JoongAng Ilbo early last month that the presidential office “checked directly and indirectly with the ministers who are expected to run in the next general election about their intentions,” and that “most of them said they will run.”