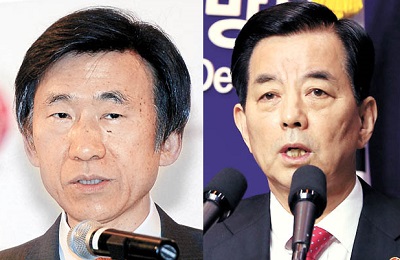 Foreign Minister Yun Byung-se cited the importance of freedom of navigation and flight in the disputed South China Sea region during an Asia-Europe Meeting (ASEM) event in Luxembourg.

It was the first time Yun addressed the South China Sea issue at an international meeting amid recent maritime tension between Beijing and Washington.

Seoul has tried to maintain a delicate balance between the two superpowers.

“The protection of the freedom of navigation and flight over the South China Sea should be guaranteed,” Yun said on Thursday at the two-day ASEM foreign ministers’ meeting.

His remark appears to align Seoul’s position closer to the United States’ stance on the maritime dispute than previously.

“The South China Sea is an important international sea line of communication,” Yun said, “and 90 percent of Korea’s energy imports and 30 percent of total trade volume passes through this route.”

He added that the Korean government has continued to call for the dispute be resolved peacefully in accordance to international norms.

On Oct. 27, the U.S.S. Lassen, an American guided missile destroyer, sailed within 12 nautical miles of the artificially dredged Subi Reef in the South China Sea, which is also claimed by Taiwan, Vietnam and the Philippines.

The reef is part of the Spratly Islands archipelago where Beijing is reclaiming land.

Beijing slammed the move as it regards 12 nautical miles of water around Subi Reef as its territorial waters. Washington called it a freedom of navigation operation, claiming that they are international waters that anybody can freely navigate.

Seoul has been careful not to take sides on the sensitive issue, but Minister of National Defense Han Min-koo last week for the first time made a public remark that appeared to put Seoul closer to supporting Washington’s stance on the issue at a regional security forum held in Malaysia.

At the Association of Southeast Asian Nations (Asean) Defense Ministers’ Meeting Plus on Wednesday, Han emphasized Korean’s position of the need for “a peaceful resolution of the South China Sea dispute” and that “the freedom of navigation and flight should be guaranteed.”

The South China Sea issue was raised briefly during the recent trilateral leaders’ summit among Korea, Japan and China in Seoul, but the Blue House did not elaborate on the discussion.

The South China Sea issue is expected to be raised as a key issue in multiple global meetings this month including a G-20 leaders’ summit in Turkey, an APEC meeting in the Philippines and the East Asia Summit in Malaysia.

“Korea is showing the nuance of siding with the United States though it is not doing so in a clear-cut manner,” said China expert Kim Han-kwon, an analyst with the Korea National Diplomatic Academy. “There is no need for Korea to shackle itself by taking a clear-cut stance.”

After the foreign ministers’ session of the Asia-Europe Meeting (ASEM) in Luxembourg, Yun flew to Tehran to hold bilateral talks with his Iranian counterpart Mohammad Javad Zarif and met with President Hassan Rouhani on Saturday.

In the first visit by a Korean foreign minister to Iran in 14 years, Seoul and Tehran agreed to bolster political and economic cooperation, especially following the landmark Iranian nuclear agreement of July 14, a deal which could possibly serve as an example for efforts to denuclearize North Korea.