Any shrinkage in China will be felt in Korea

Any shrinkage in China will be felt in Korea 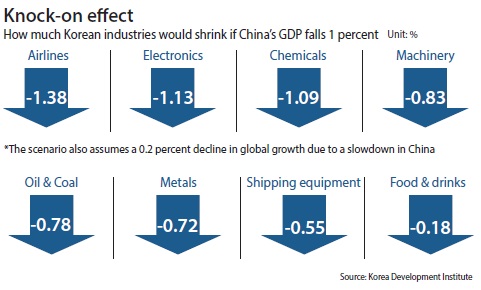 If the Chinese economy shrinks 1 percent, it would depress Korea’s GDP by up to 0.6 percent, particularly affecting the airlines, electronics and chemical industries, a Korean state-run think tank said in a report on Monday.

In the report, “Assessment and issues on the recent instability in the Chinese economy,” the Korea Development Institute said a decline in China’s economic growth would lead to a slowdown in Korean exports and negatively affect the profitability of direct investments by Korean companies.

If the Chinese economy’s growth falls 1 percent, Korea’s growth would fall between 0.2 percent to 0.6 percent, the report said, due to reduced investments or exports to China.

A slump in Chinese growth would exacerbate slowdowns in other emerging markets as well, including some Asian countries, having an indirect impact on Korea, it added.

The most affected industries would include aviation, electricity, electronics, machinery and chemical industries, the report said, as they are directly related to sales to China and investment there.

The most vulnerable industry in Korea would be the airline business, the report said, estimating it could shrink 1.38 percent. Electronics would also be hit, shrinking 1.13 percent.

The Chinese government is carrying out structural adjustments in its economy to deal with excessive investments sparked by Beijing’s large-scale stimulus measures to cope with the 2008 global financial meltdown.

As a result, China’s investment-to-GDP ratio has skyrocketed to 50 percent, the report said. The country’s snowballing debts also show overheated investment in the real estate market, it added.

Other side effects of the excessive investments are emerging in China’s leading industries such as oil, coal, chemicals, metals, construction and machinery, the report said. Profits in those industries recently plummeted.

Restructuring of those industries in China could have a big impact on the Korean economy, as more than 90 percent of Korea’s exports to China are capital goods or intermediate goods used in industries.