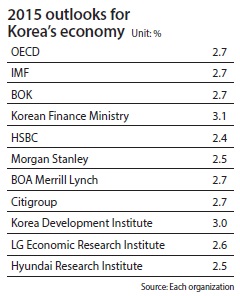 The Organization for Economic Co-operation and Development (OECD) trimmed its outlook for Korean economic growth to 2.7 percent, joining many international organizations and domestic institutes that have cut their predictions for Asia’s fourth-largest economy.

A slump in private consumption was a factor, the organization said in “OECD Economic Outlook,” which was released Monday.

For the export-driven economy, demand from emerging markets and China and a strengthening Korean won eroded competitiveness of Korean goods, the organization said.

For 2016, Korea’s economy could expand 3.1 percent, as trading will be boosted with free trade agreements signed with major partners such as China and Australia, the report said. Low global oil prices and pay increases will stimulate consumption, spurring the economy by 3.6 percent for 2017, it added.

Concerns over Korea’s low inflation, which hasn’t exceeded 1 percent this year, would be eased in two years, it said.

If the economy continues to expand and global oil prices bounce back, Korea’s consumer prices would rise around 2 percent, according to the report.

An internal risk for growth would be surging household debt, which surpassed 1,100 trillion won ($949 billion). The large debt could curb consumer confidence in the country, it said.

The biggest external risk is sluggish growth in China, the report said, given that Korea’s exports to China account for nearly 10 percent of its GDP. Volatility in Korea’s stock market still remains high, it said, amid a possibility of a U.S. interest rate hike.

For the global economy, the organization cut its projection to 2.9 percent from an earlier forecast of 3.1 percent.

Expansionary policies in some leading economies and cheap raw materials will help the global economy rebound gradually, while some external risks such as reducing trade and a U.S. rate increase put downward pressure on emerging markets, it said.