With the nation vulnerable, a new force takes hold

With the nation vulnerable, a new force takes hold 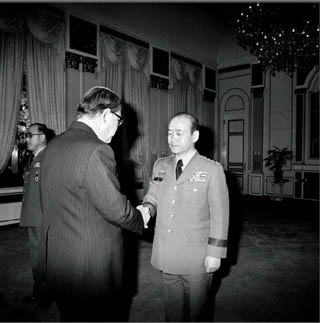 On Oct. 28, 1979, Security Commander Chun Doo Hwan addressed the public on television for the first time.

A day after the assassination of President Park Chung Hee on Oct. 26, martial law was declared and he was appointed to head the investigation team looking into the president’s death.

Every media outlet now had their focus on him and the investigators, eagerly awaiting the results of the probe. Standing before the microphone, Chun, dressed in his military uniform, came across as cold and callous.

Park’s assassination, he said, had been solely perpetuated by Kim Jae-gyu, the director of the Korea Central Intelligence Agency. No one else, he added, had been involved in the murder. 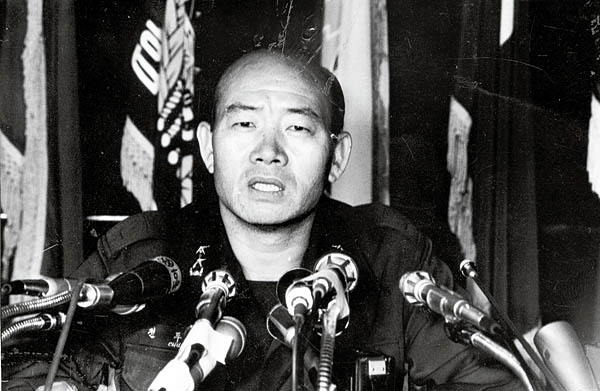 Chun Doo Hwan, right, the head of the investigation team into the assassination of President Park Chung Hee, announces the interim investigation results in a nationally televised press conference at the Defense Ministry on Oct. 28, 1979, just two days after Park’s death.

He announced that Army Chief of Staff Chung Sung-hwa had been in another building some 50 meters away from the scene and confirmed that the assassination had been carried out by one man, and one man alone, with no military collusion.

After the interim results of the investigation were announced, it appeared the shock and surprise that followed Park’s assassination was now beginning to dissipate, and the people were slowly starting to go back to their daily lives.

But while Chun dismissed any involvement by the military, an apparent power struggle appeared to be growing between his supporters and another faction within the military.

There were military officials in Chun’s faction who questioned whether the Army’s chief of staff had responded appropriately on the night of Park’s death. And many pointed that Chung had failed to arrest Kim Jae-gyu immediately after the incident.

The rift within the military began to weaken his authority and amid questions directed at him, Chung named Chang Tae-won - an officer outside Chun’s band of loyalists - as commander of the Capital Command headquarters. The appointment was interpreted by Chun and his supporters as an apparent attempt to keep them in check.

On the evening of Dec. 12, I was having a dinner with members of the ruling party at the Plaza Hotel in central Seoul when I was tipped off that there had been gun shots in Hannam-dong across from Namsan. I was growing anxious that something had gone wrong amid the instability after the president’s death.

So I headed back home and tried to collect as much information as I could. Near midnight, I discovered there had been an exchange of gun fire at the residence of the Army’s chief of staff and that Chung had been taken away by a group of armed soldiers.

I didn’t sleep that night and the next day went to my office at the National Assembly. There I got a call from President Choi Kyu-hah, who had been placed in that position just a week before in accordance with the Yushin Constitution.

I asked him what he was talking about and who would have dared to kill the president just months after Park was gunned down.

Choi told me that Chun, then the security commander, had come to his office unexpectedly the night before with his subordinates and asked him to dismiss Chung so that they could arrest him.

I could see that Choi was under enormous pressure, standing helpless before fully armed military men.

The gunshots exchanged that day had been between the military police officers attached to Chun’s investigation headquarters and the Marines standing guard outside Chung’s residence.

The clash erupted after Chun sent his officials - his collaborators in the coup - to Chung’s home to take him into custody on the grounds that the four-star-general had tacitly complied with Kim Jae-gyu’s plot to kill Park Chung Hee by doing nothing to stop him.

Chun swiftly rose to power on Dec. 12 in a military coup, carried out when the country was still vulnerable in its steps toward a new era.

President Choi was about to announce a Cabinet reshuffle and the National Assembly had just begun working on replacing the Yushin Constitution. Opposition Chairman Kim Young-sam had also just recovered his political status as party chief.

It was then that Chun Doo Hwan carried out his surprise attack.

While Chung was a man of good character, he was not decisive enough to stop Chun. At the time, he recommended to Defense Minister Ro Jae-hyun that Chun be dismissed as the head of the investigation and instead tapped to lead the East Coast Defense Command - an obvious demotion.

He and his supporters took control of the government by force.

His decision to arrest Chung was a blatant act of mutiny. In carrying out his rebellion, he sent a team of his subordinates to the general’s residence to arrest him, while at the same time he went to see President Choi to demand he consent to Chung’s dismissal.

Choi insisted that the defense minister be brought before him to consent to Chung’s dismissal, in accordance with protocol.

Yet, in less than 10 hours, Ro appeared before Choi, and Choi gave Chun and his supporters the OK.

The power was now tilted in Chun’s favor, and by then he and his supporters practically ruled over the military - over which the president had no influence.

Chun became a dominant figure in the political establishment, where guns now trumped the power of the Constitution. It was a somber reminder that authority in name does not automatically equate to real power, especially without real strength.
It was a new era, and in just one night, a weak government had been overthrown.