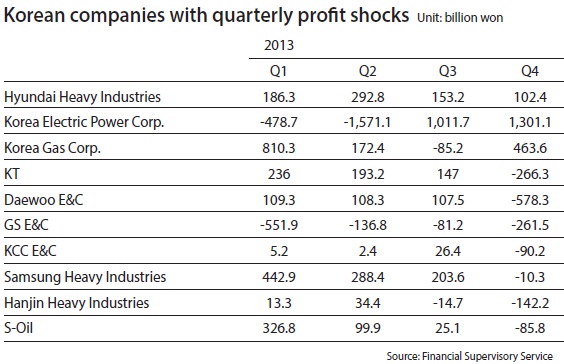 Daewoo Shipbuilding and Marine Engineering (DSME) made headlines when it reported 3 trillion won ($2.6 billion) in losses for the third quarter, which had been accumulating for years and internally concealed, but a new study showed that it wasn’t the only Korean company to have kept such lax accounting.

According to a recent report issued by members of the Financial Services Commission (FSC), Financial Supervisory Service, Korean Institute of Certified Public Accountants and the Korea Accounting Institute, nearly 36 companies reflected losses of 50 billion won or more within a single quarter over the past two years.

The sudden losses were seen in industries raging from shipbuilding, heavy industries and construction to steel manufacturing, electronics, telecommunications and gas. 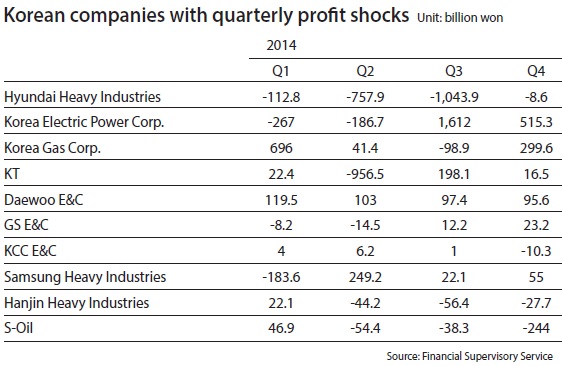 “The financial authorities plan to look into some of the 36 companies’ books after deciding whether DSME’s earnings shock resulted from cooking its books,” said a government official.

Unexpected earnings reports are frequent in major industries whose businesses are heavily dependent on orders, such as shipbuilding and construction, which makes them more sensitive to changes in the global economy. But they can also be the result of balance sheets that have been intentionally manipulated to hide losses, which some have alleged was the case with DSME.

The task force behind the latest study found two trends in sudden massive losses or profits. First, surprising quarterly reports are most common in the construction, heavy and shipbuilding industries, which rely on orders that take many years to complete. Companies in these industries calculate their quarterly performances based on the total orders received along with the rate of construction. As a result, quarterly losses and profits are just guesswork until construction is actually complete.

Another trend is the use of “big bath” accounting, in which losses are exaggerated in a single quarter to make the rest of the year’s performances appear stronger.

It is usually practiced for a specific purpose, such as raising the value of a company’s shares or attracting investors by hiding losses for a given period. Big bath accounting is also illegal, and companies that do so can be charged for deceiving investors.

The track records of the 36 companies raise questions about possible manipulation.

In 2013, construction firm Daewoo E&C reported a surplus of 100 billion won every quarter except the fourth, when it suddenly suffered a deficit of 578.3 billion won.

But it’s difficult to determine malfeasance just by looking at the figures.

“Our overseas businesses suffered losses as oil prices started to fall in 2013,” said a Daewoo E&C official. “We placed over 500 billion won as losses after reflecting future risks, as there was a possibility that our overseas businesses could suffer hugely if the low-crude price continued.”

KT said its losses reflected the 1 trillion won it had to pay its employees who were voluntarily retiring.

Even if there haven’t been any illegal activities involved, repetitive earning shocks prevent investors from making the best investment decisions and harm the overall quality of the local financial market as a whole, said Kim Yong-beom of the FSC.

The report especially noted that at a time when the construction, heavy and shipbuilding industries are struggling, there is an increased chance related companies would manipulate their financial information.

In hopes of enhancing the transparency of companies’ balance sheets, the government unveiled measures on Oct. 28 that included companies having notify the public about the ongoing construction projects and existing financial reserves used to estimate profits every quarter.

The financial authorities also plan to raise the penalties levied on companies that manipulate records.