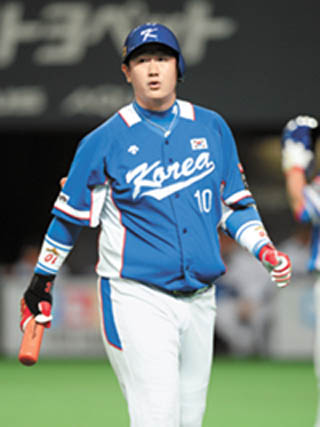 Korea’s Lee Dae-ho heads to the dugout during the Premier 12 opening game against Japan at the Sapporo Dome in Sapporo on Sunday.

Before Korea’s national baseball team played against Japan in the Premier 12 tournament opener on Sunday, there were high expectations for Lee Dae-ho.

Not only has the slugger been playing in Japan for four seasons, but Lee was also named Japan Series MVP after leading the Fukuoka SoftBank Hawks to defend their Nippon Professional Baseball (NPB) championship title last month.

But in Korea’s disappointing 5-0 loss against Japan at the Sapporo Dome, Lee didn’t live up to the hype, going 1-for-4.

It turned out that the 33-year-old, who recently announced he will try to play in the Major League Baseball next season, still hasn’t recovered from an injury.

Lee was hit by a pitch on his right palm during Game 5 of the Japan Series against Tokyo Yakult Swallows on Oct. 27. The former Orix Buffaloes and Lotte Giants player couldn’t even complete an entire batting practice until the day of the Premier 12 game.

Just like other Korean batters, Lee also had A difficult time facing Japanese starter Shohei Otani who struck out 10 batters in six innings, including Lee.

Lee, who was a two-time triple-crowner in the Korea Baseball Organization, was later struck out by Japan’s relief pitcher Takahiro Norimoto in the seventh, but in his appearance at bat, he managed to get a single from Yuki Matsui.

Lee’s disappointing performance was comparable to that of teammate Park Byung-ho, who is also looking to play in the MLB through the posting system. The Nexen Heroes slugger went 2-for-4 on Sunday.

Since Lee’s injury isn’t fully healed and he’s in the process of searching for an MLB club for next season, he could have skipped the tournament. But the Busan native said that rejecting a call from the national team was never an option.

“Even if I get criticized by people for performing poorly, I would rather be criticized for playing with the national team,” said Lee.

“Your country is calling and you have to be there. What should I do, take a rest? ”

This is the sixth time that Lee has worn the national team uniform, and in the 2008 Summer Games in Beijing, he helped Korea to win gold.

Though Lee didn’t live up to his reputation in this first game, there are still many more left. Korea is now scheduled to face the rest of its opponents in Group B in Taiwan, arriving there on Monday evening.

Starting with the Dominican Republic on Wednesday, Korea then faces Venezuela on Thursday, while playing Mexico and United States over the weekend.

Hoping his palm injury will fully recover, Lee aims to deliver performances that live up to his reputation. But no matter what, Lee said he will be there when the country needs him.

“I think being on the national team is good,” he said. “It has been my dream to play for my country.”