Cars are all about tech these days

Cars are all about tech these days 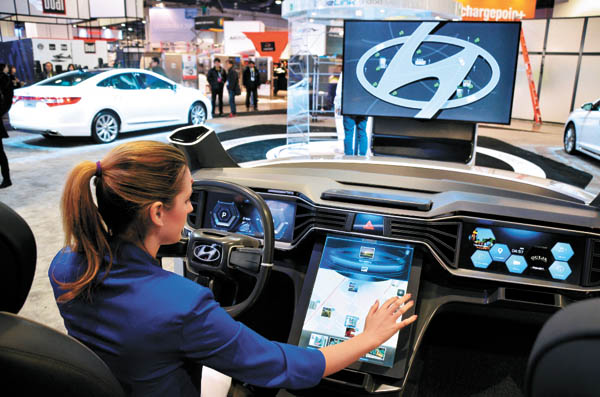 The Miracle on the Han River has brought Korea a long way. Per capita income has grown from $255 in 1970 to $24,565 last year. In terms of wealth, Korea has surpassed the Philippines, Indonesia, Turkey and Argentina, all of whom were wealthier in the 1960s.

The key to such progress was manufacturing and exports. According to the Korea International Trade Association, Korea was the top exporter in 65 items on the global market in 2013. A full 24 of them, including chips, car parts and tankers, had held their top spots for six consecutive years.

The item that showed the biggest fall was also one of Korea’s most valuable exports: vehicles. The BOK said that the number of car transactions by local automakers in the global market dropped by 1.3 percent in the past 10 years while the figure for auto parts dropped by 0.3 percent.

“Leading automakers such as Hyundai Motor and Kia Motors are facing tough challenges, mainly due to competition with rivals including Toyota and slumping growth in newly industrialized nations such as China and Brazil,” said Lee Hang-ku, a researcher at the Korea Institute for Industrial Economics & Trade (KIET).

“They certainly need to find a new growth engine while continuing to develop competitive cars that can attract global consumers, since economic conditions like unstable foreign exchange rates will exist forever.”

Luckily for the automakers, this is a time of tremendous innovation in their industry. Cars are evolving at a very brisk pace, which opens up opportunities.

The biggest wow in car wizardry to show up recently was the new BMW 7 Series’ 13 new technologies, which include a self-parking system. A driver can park his or her car while standing outside of it by using the car’s “smart key” as a remote control.

“By using this self-parking system, drivers can conveniently park their cars in places that have narrow parking spaces,” said Ian Robertson, BMW Group’s chief of sales and marketing when he visited Seoul to introduce the 7 Series.

The smart key, which has a small liquid crystal display, shows a range of information like whether the doors of the vehicle are closed or open and whether the car is in a safe condition to drive. BMW’s Gesture Control allows drivers to change audio volumes or accept phone calls with gestures. Though a touch-screen tablet installed in the back seat, passengers can control massage seats and surf the web.

Automakers’ flagship sedans show off their newest technologies and the future direction of development. BMW’s 7 Series was obviously showing the convergence of information technology and cars, which is leading to self-driving cars. According to U.S. researcher IHS, sales of driverless cars in 2025 will be 230,000 units per year worldwide and the figure will grow to 11.8 million per year in 2035 with an average annual growth rate of 48.3 percent.

Korea’s car companies are on the bandwagon. The nation’s leading automaker, Hyundai Motor, will unveil Highway Driving Assist (HDA), a partial self-driving system, on its new EQ 900, the successor to its flagship Equus sedan, which will be unveiled and start sales in December. The Equus will automatically maintain distance from a car in front and will also control its speed in accordance with speed limits on each highway. Equus will be the first Korean car with HDA.

Hyundai Motor says its goal is to apply its most sophisticated driverless car technology in mass-produced cars such as the Genesis and Sonata sedans. It has already adopted a lane departure warning system, lane-keeping assist system and advanced smart cruise control system, which the company said are the basic features for self-driving car technology. Hyundai Motor said that it is cooperating with global IT companies such as Google and Apple, adding that it installed Android Auto, a car operation system developed by Google, to Sonatas being sold in the United States, the first among global automakers. The system allows drivers to use phones, music and Google’s map service while driving. 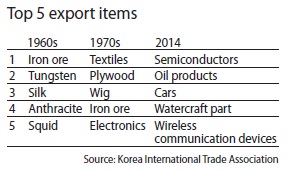 “We know that global IT companies like Google are working on autonomous driving technologies, but the difference with us is that everything we are working on will be applied to mass-producing cars while others focus on the driving system function itself,” said a spokesman for Hyundai Motor.

LG Electronics established a Vehicle Components division in July 2013, and announced last Dec. 25 that it will develop core parts for Mercedes-Benz’s self-driving systems. LG then strengthened its partnership in the automotive application components with global manufacturers. It introduced GEA, a self-driving concept car, in collaboration with Italian industrial designer Giorgetto Giugiaro in March.

“Such collaboration will continue and will be seen more often,” said Hong Sung-soo, a professor of electronic information engineering at Seoul National University. “Automakers and IT companies need to develop stronger partnerships, since the products that IT companies will offer will include next-generation technology. They are not just a part maker anymore.”

Industry insiders say that the government needs to work on regulations for self-driving cars if it wants to see local businesses thrive in the global market. According to the Ministry of Land, Infrastructure and Transport, it has regulations that allow cars with self-driving systems to be studied and researched on the road.

But so far, those regulations require a person to be inside a car.

“Under the national traffic laws, self-driving cars can only be operated when a driver is behind the steering wheel no matter if he or she drives the vehicle or not,” said a spokesman for the National Police Agency. Researcher Lee Hang-ku from KIET warns that the government needs to get with the program.

“The Finance Ministry has been consistently giving financial support in research and development to its lower divisions related to autonomous cars,” Lee said. “But if the government doesn’t provide an appropriate environment in which the industry can grow, it will be another case of throwing good money after bad by the administration.”