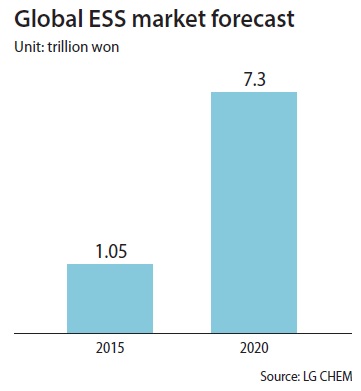 LG Chem was selected as the exclusive battery supplier for a project building energy storage systems (ESS) in Germany.

The company said Monday it will supply batteries to Nidec ASI, the biggest ESS solution company in Europe, which is participating in a project to develop an ESS in six regions of Germany, including Nordrhein-Westfalen and Saarland province. The project is led by the country’s fifth-largest power company, Steag, and is supposed to be completed next year.

LG Chem will supply batteries with a capacity of 140 megawatt-hours (MWh) for an ESS that needs to be developed for frequency regulation since the Germany government recently revised its regulations to keep power generators’ frequency at 50 Hertz. The new ESS to be developed will help the power generators’ frequency remain at that level while saving and supplying power in accordance with changes of power demand in real time.

It is the biggest contract in the world for a frequency regulation ESS development project. The 140 MWh of capacity is an amount for which 7,600 electric vehicles can charge at the same time.

The company didn’t say how much it would earn from the project, but it is expected to be several billion won. It added that it expects to make more profits since the German government recently revised regulations that make power companies have ESS with frequency regulation control.

By winning a contract to supply 140 MWh of batteries, the total of contracts won by the company has exceeded 400 MWh this year, which is about 50 percent of the world’s shipments of such equipment last year, which was 764 MWh, according to global market research firm B3.

The global ESS market is expected to grow by seven times in the next five years, or from this year’s 1.05 trillion won ($905.26 million) to 7.3 trillion won in 2020, another research firm, Navigant Research, said.

This year, LG Chem won a contract to supply 31 MWh capacity of batteries for an ESS in Japan in February and also teamed up to build a battery-based ESS with North America’s largest power company, Duke Energy, in May. LG Chem said it will strengthen its partnership with Nidec ASI to expand in Europe.

“We believe that we have occupied a position that can lead the global market by winning the world’s biggest ESS project,” said Kwon Young-soo, President of LG Chem. “We will keep trying to be the leader not only in ESS but also in the electric vehicle battery business, including in North America and Europe.”