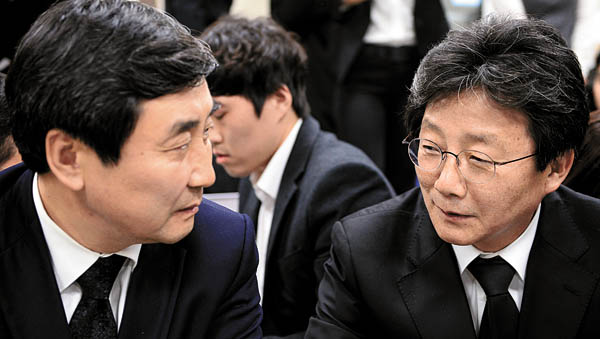 Saenuri Party Rep. Yoo Seong-min, right, speaks with fellow lawmaker Lee Jong-kul, a member of the main opposition New Politics Alliance for Democracy, on Monday at the mourning altar set up for his father, Yoo Su-ho, a former judge and lawmaker who died on Saturday at the age of 84 from complications from pneumonia. [NEWSIS]

The death of former judge and lawmaker Yoo Su-ho, the father of Saenuri Rep. Yoo Seong-min, has sparked renewed discussion about the unfortunate relationship between his family and that of President Park Geun-hye over two generations.

Yoo Su-ho died on Saturday at the age of 84 from complications from pneumonia. He was a former judge and lawmaker known for his strong and straightforward political determinations. A native of Yeongju, North Gyeongsang, he studied law at Korea University and went on to become a judge at the Daegu District Court in 1961.

However, Yoo was ousted from the bench in 1973 for failing to pass the reappointment process instated by the Park Chung Hee administration. Yet, rumors spread that he was removed for releasing students who led protests against Park’s amendments to the Constitution that allowed him to stay in power indefinitely.

After working as a private lawyer, Yoo started his political career with the Democratic Justice Party in 1985. He served two terms, representing Daegu’s Jung District from 1988 until 1995.

“He didn’t hesitate to be straightforward with the president,” said Park Jong-kun, a former lawmaker in Daegu. “He was known as a stubborn mule, and his son inherited that character.”

Politicians have since flocked the mourning altar at Kyungpook National University Hospital in Daegu to pay their respects, where they were received by Yoo Seong-min, a ruling party member and the former Saenuri floor leader, known for his deep affection for his father.

Politics played a key part of the funeral, given the history between Yoo and President Park, as well as between their late fathers. Yoo stepped down as floor leader in July after losing a nearly two-week-long battle with Park and her loyalists.

The president issued a lengthy, angry criticism of Yoo for his “politics of betrayal” and condemned him for having made an unacceptable deal with the main opposition party that she claimed was merely for his own political gain.

She subsequently vetoed a bill that the ruling party supported in the deal brokered by the younger Yoo. The ruling party later apologized to the president and forced Yoo to resign.

Yoo was formerly one of Park’s confidants and was once selected as her chief of staff when she served as chairwoman of the ruling party. He also headed Park’s public affairs strategy team during her 2007 presidential primary campaign. However, the two became estranged before the 2012 presidential election.

Yoo was elected as the Saenuri floor leader in February based on his promise to put the party back at the center of policymaking and change its way of doing business with the Blue House. Throughout his term, Yoo was assertive in getting his demands heard and often confronted the Blue House over various issues.

Rep. Lee Jong-kul, the floor leader of the main opposition New Politics Alliance for Democracy, visited the mourning altar around 9:30 p.m. on Sunday and had a late supper with the Yoo.

In reference to the late Yoo’s dismissal from the bench during the Park Chung Hee administration and the younger Yoo’s forced resignation as Saenuri floor leader, Lee said, “Those were two generations of righteous events, but the assailants who inflicted the pain appear to have nothing to say.”

While Yoo stated that the family would not accept flowers or monetary gifts for the funeral in accordance with his father’s wishes, more than 150 flower arrangements had arrived as of Sunday from political and societal leaders, including the National Assembly speaker, the prime minister, the chairmen of the ruling and opposition parties and the chief justice of the Supreme Court.

Conspicuously missing, however, were flowers from the president, though presidential Chief of Staff Lee Byung-hee and Senior Presidential Secretary for Labor and Welfare Kim Hyun-sook sent arrangements.

According to Jung Youn-kuk, the presidential spokesman, the Blue House has no plans to send official condolences to the family.

He added that the president did not send flowers because the Yoo family had publicly stated that they would politely decline flowers and monetary gifts.

“Please understand it was out of respect for the deceased and the family,” Jung said.