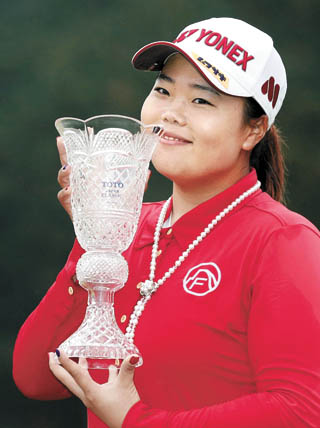 Ahn Sun-ju smiles with her trophy after winning the Toto Japan Classic, her first LPGA Tour victory, in Shima, central Japan on Sunday. This was Ahn’s 20th JLPGA title since the event was co-sanctioned by LPGA and JLPGA. [AP/NEWSIS]

After getting a surprise win at the Toto Japan Classic on Sunday, Ahn Sun-ju was too exhausted to celebrate.

“I haven’t had a victory party yet,” Ahn said on Monday to the JoongAng Ilbo. “But I’m happy. This year, I had a difficult time because of my injuries, but yesterday’s victory made it all worthwhile.”

Ahn got married last year and wanted to start this year fresh. But the 28-year-old couldn’t catch a break, suffering injuries to her neck, lower back and knee.

But because of her injuries this year, she only won the Century 21 Ladies in July before last week. Ahn said the victory at the Toto Japan Classic, which would be her second triumph of the season, was unexpected.

“My body still isn’t healthy enough,” she said. “For the Toto Japan Classic, I only thought to have bogey-free games, but I was really fortunate [to win.]

At the Kintetsu Kashikojima Country Club in Shima, Ahn edged compatriot Lee Ji-hee and Angela Stanford of the United States with a birdie on the first hole of a playoff after three tied at 16-under 200 in the regulation. Since the Toto Japan Classic is co-sanctioned by both the JLPGA Tour and the LPGA Tour, Ahn earned her first career win in the LPGA Tour and her 20th victory in the LPGA Tour.

Ahn, whose world ranking jumped from 29th to 22nd this week, also has secured LPGA Tour membership for next season, and is now eligible to play at the LPGA Tour’s final event CME Group Tour Championship in Florida this month. If she wants to join the LPGA Tour, the 160-centimeter tall golfer needs to tell LPGA by Nov. 23.

“Since I didn’t know I would win the event, I haven’t thought about playing in the LPGA Tour,” she said. “I had no time after the winning the event as well. I also have yet to talk with my family.”

What concerns Ahn is the LPGA Tour’s tight schedule and long travel times. Ahn said that at this moment, she isn’t healthy enough to play in the LPGA.

“Long-distance flying is especially hard on my neck, which isn’t feeling well,” she said. “If I was the same age as Chun In-gee [who is 21], I would go to the LPGA Tour, but right now, I feel that playing in a new environment is taking a gamble.”

While measuring her future chances of joining the LPGA Tour is important task, Ahn already made up her mind to not play in the LPGA Tour’s last event, the CME Group Tour Championship. Instead, she will focus on playing Japanese tour events.

“I have to wrap up events in the JLPGA Tour that I promised to play,” she said. “I’ll decide what will make me happiest regarding my career after discussing things with my family.”

Ahn may have a lot to think about, but whether or not she’ll be able to play at home will no longer be an issue. The KLPGA Tour on Monday announced that it decides to give her a permanent tour card.

According to the KLPGA, golfers who collected 20 wins or more in three major ladies golf tours - the LPGA, JLPGA and Ladies European Tour (LET) - are qualified for having permanent seed for the KLPGA Tour.

Ahn, who became a KLPGA member in 2005, will be the fifth golfer to be honored with the permanent tour card after the late Ku Ok-hee, Pak Se-ri, Jeon Mi-jeong and Shin Ji-yai.

“I knew that one victory will give me the permanent tour card and I was wondering when the time would come,” said Ahn, who has seven wins in the KLPGA Tour. “I’m happy to achieve many things with the victory. Although my main stage is in Japan, I want to play Korean events in near future.”