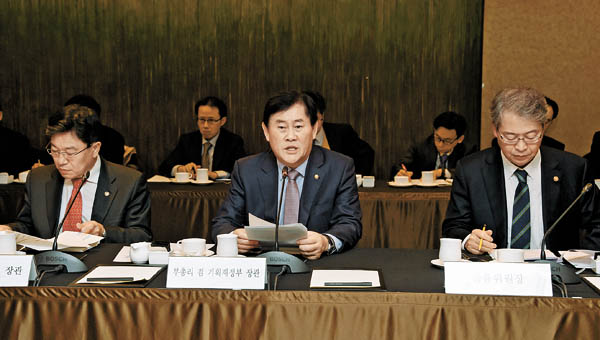 From left: Minister of Trade, Industry and Energy Yoon Sang-jick, Minister of Strategy and Finance Choi Kyung-hwan and Financial Services Commission Chairman Yim Jong-yong attend a meeting that discussed preventing the insolvency of construction and shipbuilding companies, held at Lotte Hotel in central Seoul on Tuesday. [MINISTRY OF STRATEGY AND FINANCE]

State-run banks will more closely examine the profitability of large-scale overseas construction projects won by Korean companies before offering any financial support, a move aimed at preventing another insolvency scandal like the one at Daewoo Shipbuilding & Marine Engineering (DSME).

One primary factor in the recent losses by Korea’s biggest shipbuilders - which analysts expect to surpass 7 trillion won ($6 billion) this year - was the companies’ practice of dumping prices to win bids for a large-scale project amid tough competition, the finance minister pointed out, according to a press release by the ministry on Tuesday.

As a result, many shipbuilders found themselves suffering losses even as they won a big overseas project.

The problem, Choi pointed out, is that offering financial aid for such unprofitable projects could lead to serious insolvency at state-run banks and institutions.

“Keep in mind that deterioration in the fiscal soundness of state-run financial institutions would ultimately become a burden on the people,” Choi said, according to the Finance Ministry.

At the meeting, officials agreed to make it compulsory for state-run banks and institutions to assess the profitability of large-scale overseas projects through a specialized organization before offering financial support.

Two special teams will be launched to conduct the profitability assessments, with each focusing on either offshore platforms or shipbuilding projects. Specifics for the assessments haven’t been decided yet, officials said.

One of the key ways in which the government supports Korean builders in their efforts to win overseas contracts is through the provision of so-called Refund Guarantees. The documents are issued by state-run banks and guarantee the refund of a client’s deposit if construction is delayed, canceled or fails to meet the deadline. If the builder can’t afford to provide the refund, the document certifies that the bank will do so instead.

“Many overseas organizations demand RGs issued by state-run banks, because it is safer than other RGs issued by private banks,” an official from Eximbank said by phone. “So far, state-run banks issued those guarantees based on the overall credit rating and financial statements of builders, rather than estimating the profitability of each project.

“From now on, if the state-run banks find a project unprofitable, they will be reluctant to issue the RG,” he said. “Those builders will have to apply for one at private local banks.”

Stronger scrutiny on RGs deals a blow to Korean builders, said Kim Jong-hyun, an official from the International Contractors Association of Korea, a government organization in charge of cooperation between builders and the government.

“One of the biggest reasons that builders want an RG issued by state-run banks is because commissions [for the issuances] are much cheaper than those at private banks,” Kim said. “Also, many overseas organizations demand an RG by a state-run bank during the bidding, and some even refuse to sign a contract without an RG from a government bank.”

The total value of overseas projects won by Korean builders is expected to fall about 27 percent at the end of this year from a year earlier, and the struggling industry is forecast to suffer as well next year, a recent report released by the Eximbank said.