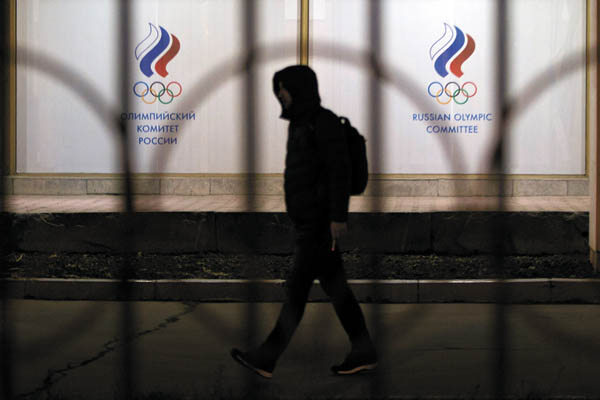 A man walks by the Russian Olympic committee building in Moscow on Monday. Russian track and field athletes could be banned from next year’s Olympics in Rio de Janeiro after a devastatingly critical report accused the country’s government of complicity in widespread doping and cover-ups. [AP/NEWSIS]

GENEVA - Russia’s status as a sports superpower and its participation in track and field events at next year’s Olympics came under threat Monday after a report accused the Russians of widespread, state-supported doping reminiscent of the darkest days of cheating by the former East Germany.

The findings by a commission set up by the World Anti-Doping Agency were far more damaging than expected. It means that two of the world’s most popular sports - soccer and track and field - are now mired in scandals that could destroy their reputations.

The WADA investigation’s findings that Russian government officials must have known about doping and cover-ups, with even its intelligence service, the FSB, allegedly involved, threatened to severely tarnish President Vladimir Putin’s use of sports to improve his country’s global standing. Russia hosted the last Winter Olympics in Sochi in 2014 and will hold the next World Cup in 2018.

“It’s worse than we thought,” said Dick Pound, an International Olympic Committee veteran who chaired the WADA probe. “It may be a residue of the old Soviet Union system.”

The 323-page report said that in Russia, “acceptance of cheating at all levels is widespread.” Among its findings:

? FSB agents regularly visited the lab, routinely questioned its staff and told some of them not to cooperate with WADA as part of “direct intimidation and interference by the Russian state” with the lab’s work. Staff at the lab believed their offices were bugged by the FSB.

? FSB agents even infiltrated Russia’s anti-doping work at the Sochi Olympics. One witness told the inquiry that “in Sochi, we had some guys pretending to be engineers in the lab, but actually they were from the Federal Security Service.”

? “Widespread inaction” by track and field’s governing body, the International Association of Athletics Federations, and Russian authorities allowed athletes suspected of doping to continue competing. “The Olympic Games in London were, in a sense, sabotaged by the admission of athletes who should have not been competing,” the report said.

The WADA commission, set up after a German TV documentary last year alleged widespread Russian doping and cover-ups, recommended that WADA declare the Russian athletics federation “noncompliant” with the global anti-doping code, and that the IAAF suspend the federation from competition.

The IAAF responded by saying it will consider sanctions against Russia, including a possible suspension that would ban Russian track and field athletes from international competition, including the Summer Olympics in Rio de Janeiro.

“If they are suspended - and it sounds like the IAAF is moving in that direction already - and they are still suspended, at the time of Rio, there will be no Russian track and field athletes there,” Pound said in an interview with The Associated Press after the release of the findings.

He said Russia’s doping could be called state-sponsored. The commission said its months-long probe found no written evidence of government involvement, but it added: “It would be naive in the extreme to conclude that activities on the scale discovered could have occurred without the explicit or tacit approval of Russian governmental authorities.” AP