Costco’s online mall for Koreans is first in Asia

Costco’s online mall for Koreans is first in Asia 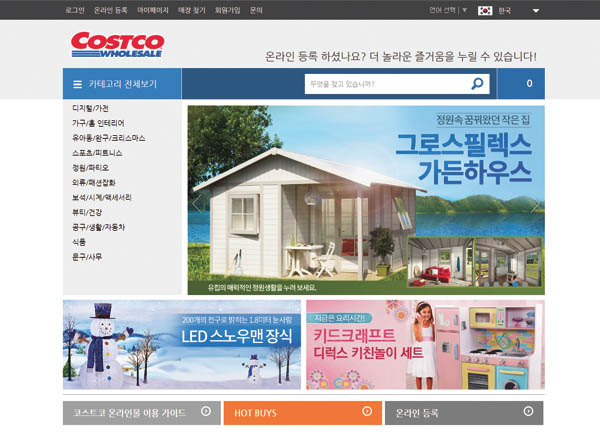 Costco Wholesale, the U.S. retailer known for bulk selling, opened an online mall in Korea on Tuesday, its first in Asia.

Since the retailer has only 12 stores across the country, many potential customers living far from the locations have desired an online mall.

The mall is the fifth digital platform for Costco, following launches in the United States, Canada, United Kingdom and Mexico.

To use the mall, an annual membership registration and fee are required as they are for customers going to Costco stores. The company charges corporate customers 30,000 won ($26) a year and 35,000 won for individuals.

The retailer said it will directly deliver products but didn’t specify which regions could receive deliveries.

The website features only 170 products, and some of the best-loved items by Korean consumers, such as baked goods, were nowhere to be found. It doesn’t offer fresh meat or fish, wine or beer, or one of Korea’s favorites, a fresh-cooked pizza.

The retailer is known here for offering a number of snacks and chocolates from different countries, but the online store carries only 26 items in its snack section.

“I was looking forward to the online mall,” she said, “because it is not always easy to go to Costco and shop with my kids. I was disappointed to learn that they don’t have the products that I wanted to buy.”

Costco is popular among Korean consumers.

Costco grabbed the top position with an average score of 3.84 out of five, followed by E-Mart and Homeplus.

Costco received a particularly high score of 4.27 in product selection.

Runner-up E-Mart got higher scores for convenience and store management.

Costco has stores in Seoul, Busan, Daegu, Daejeon and cities in Gyeonggi.