EQ900 is getting a slow reveal

EQ900 is getting a slow reveal 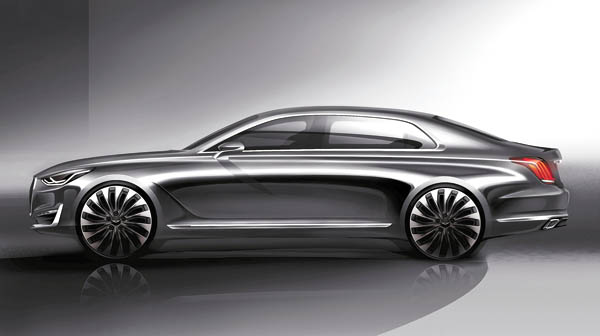 HWASEONG, Gyeonggi - Hyundai Motor gave a peek at its new EQ900, the first car to be rolled out under the automaker’s newly launched luxury brand Genesis.

In a media preview held Tuesday at its Namyang R&D center in Hwaseong, Gyeonggi, the nation’s leading automaker unveiled some features of the Genesis brand’s flagship sedan EQ900, including a computer rendering and description of powertrain options.

The EQ900, which will be sold as the G90 in export markets, will be unveiled completely next month after a four-year development period in which about 1,200 engineers and researchers participated.

“We kept asking ourselves what we really needed to do for customers as we developed the EQ900,” Vice Chairman Yang Woong-chul said. “I guarantee that this is the most advanced full-size luxury sedan that will set a new paradigm for the segment.” 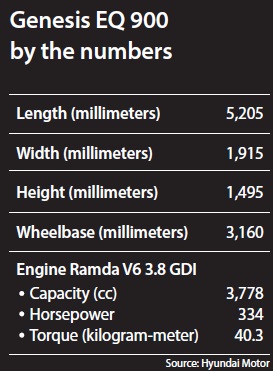 The features that Hyundai paid most attention to were safety and quality of the ride. The company said 51.7 percent of the EQ900’s body was made of advanced high-strength steel, which is 10 percent lighter and twice as strong as normal steel.

The nickname for the Equus, the predecessor of the EQ900, was “chairman car,” denoting a luxe sedan used by the head of a Korean company. The new flagship sedan similarly wants to be a top drawer. The leather used for its interior walls is semi-aniline, which was developed in cooperation with Italian leather processing brand Pasubio. Special logs were used for the wood trim. The company is introducing a high-end seat called the “Modern ERGO Seat,” which is based on first-class seats in airplanes. In the rear, passengers are able to adjust the seating mode - to relax, reading or watching a video - by pressing a button

“It’s been eight months since I came to Korea,” said Albert Biermann, the head of vehicle testing and high-performance development. “While I’m driving in Korea, I had to deal with so many speed bumps and challenging road conditions, and I believe that the EQ900 will offer comfortable riding in such local conditions.”

The EQ900 is equipped with an autonomous driving system known as Highway Driving Assist, a combination of advanced smart cruise control and a lane maintenance assist system.

Design was highly important for the EQ900, since a flagship sedan generally reflects a brand’s design identity. The company didn’t release any photos of the exterior or interior designs of the EQ900, but displayed four cars in a showroom so reporters could see it. Photos weren’t allowed.

When a cover was removed, the first thing that came into sight was a large radiator grille on the front, similar to the second-generation Genesis sedan, which will be renamed the G80. The grille will set a family look for the Genesis brand’s G Series. The Genesis brand will consist of six models, including four entirely new cars - a near luxury sedan, a midsize luxury SUV, a luxury sports coupe and a near luxury SUV.

Reporters wondered whether enough big changes had been made in the EQ900. Expectations among local consumers is high, since the Genesis is the first luxe car brand launched by a Korean automaker. A failure to provide a design that is significantly different from existing models might disappoint them.