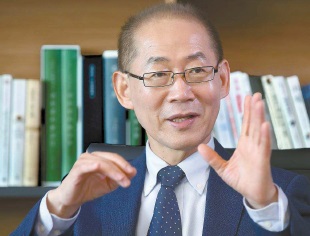 
Climate change has long been a topic of discussion among developed nations, so it’s only natural that the West has played a major role in international environmental organizations.

Therefore, it was particularly notable when Lee Hoe-sung, 69, a professor at Korea University’s Graduate School of Energy and Environment, was elected on Oct. 7 to serve as the sixth chair of the Intergovernmental Panel on Climate Change (IPCC).

Lee will serve in that role for five to seven years until the sixth assessment report on climate change is completed. The professor has enjoyed a colorful career and been involved in the energy field for years.

After graduating with a degree in commerce and trade from Seoul National University, Lee received his doctorate in economics at Rutgers University in 1975. Afterwards, Lee worked in a number of posts, including senior fellow at the Korea Development Institute, founding director of the Korea Energy Economics Institute and president of the International Association for Energy Economics.

His new role as chair of the IPCC is expected to raise his influence in the field of climate change.

The IPCC was established in 1988 by the United Nations Environment Program and the World Meteorological Organization. Despite having just 10 employees, its influence has been significant enough to effect worldwide change. And with climate change determined to be the result of human activity, the role of the IPCC has become ever more crucial.

The JoongAng Ilbo sat down with Lee last month to discuss his new role.

Q. Could you please introduce the IPCC?

A. The IPCC is a global think tank that scientifically analyzes and gathers information on the current state of climate change and provides solutions to alleviate the problem. The organization submits an assessment report once every five years. Although the IPCC does not intervene or regulate administration in other countries, its role has gained attention since the release of carbon dioxide and greenhouse gases have become more serious issues.

Do you think your Korean nationality played a role in your appointment?

Yes. Korea is the only country in the world that has been transformed into a developed nation from the ruins of war. So people tend to perceive Korea as a country that achieves what it says it will. President Park Geun-hye’s pledge to contribute up to $100 million during last year’s climate summit, along with the Korean government’s continuous effort to support climate change, also helped me obtain this post. Within the IPCC, there is the belief that Korea is the most eligible country to narrow down differences in opinions among developing and developed nations. That also played a part.

How long have you been involved with the IPCC?

While working as the founding director of the Korea Energy Economics Institute in 1988, a few foreign scholars contacted me about the IPCC, which was in its first stages. So I have been an observer with the organization since its establishment. From 1992 to 1997, I also worked as co-chair of the third Working Group that deals with the social and economic effects of climate change.

Some scientists doubt that climate change is the result of human activities. Are there any differences of opinion within the IPCC?

That human activities affect climate change is an established fact within scientific circles. Even though there may be differences in opinion regarding the degree of human influence on climate change, the fact itself has reached a consensus. So if people do not act and continue on with their activities, the average temperature of Earth is expected to rise between 4 degrees to 6 degrees Celsius maximum.

We share the belief that the actions made to solve climate change problems are crucial.

Is the speed of change threatening?

Earth’s temperature rose and decreased at a consistent rate throughout the glacial and interglacial periods. There were multiple times in which the temperature changed by more than 4 degrees. The temperature gradually rose or decreased over 50,000 years.

However, there was never a time when the earth’s temperature increased by 4 degrees in 80 years. There has never been such a time since the emergence of human beings. This really is a huge problem.

Despite its urgency, global countermeasures to deal with the issue don’t seem rapid enough.

Since the Kyoto Protocol was signed in 1997, the world’s efforts to work on climate change have been at a standstill. However, the Barack Obama administration is displaying an activeness on the issue, and China is also paying attention. Specific countermeasures such as the imposition of a carbon tax will be made during the United Nations Climate Change Conference in Paris, which is scheduled from Nov. 30 to Dec. 11.

Climate change is expected to have a huge impact on the economy.

Yes. Carbon emissions trading is being implemented starting from Europe to the world in a move to restrain greenhouse gas emissions. Korea also implemented that system last year. Such a system has brought about a fundamental change in the business environment. Even though it may seem to be a huge expense in the short run, think about how the world would be if people did not act.

Isn’t the financial burden the main reason behind the differences in opinion among developing nations and developed nations?

Yet, this has the potential to ignite controversy over where these gases are being discharged. For example, the majority of the products made in China are exported to Western countries and used by the Westerners. So some people may point out the need to measure the amount of emissions throughout the entire process, from manufacturing to consumption.

Korean companies don’t seem to be active in dealing with the climate change issue.

Efforts to research solutions for climate change are ongoing worldwide. There are two main methods for doing so. The first is the development of new renewable energy, and the second is the effort to raise the efficiency of the energy. To look at it another way, there are many business opportunities in this new potential market. And there are many talented people in Korea. The firms that invest on technology and research and development on climate change are expected to earn a great amount of profit.

What is Korea’s role in the climate change issue?

Climate change is the biggest problem facing the world. And despite its urgency, world nations cannot seem to narrow down their differences. But Korea can understand both sides and embrace those differences. There’s even a secretariat of the Green Climate Fund in Songdo International Business District, Incheon.

Nuclear power is an important issue in relation to energy, and Korea has greatly decreased greenhouse gas emissions with the help of nuclear power plants. What does the IPCC think about nuclear power?

The IPCC does not speak negatively about specific technologies. In order to minimize the risks, it is important to diversify the investments over various technologies. And I believe nuclear energy is one of the alternatives.