Park increases her focus on the April elections

Park increases her focus on the April elections 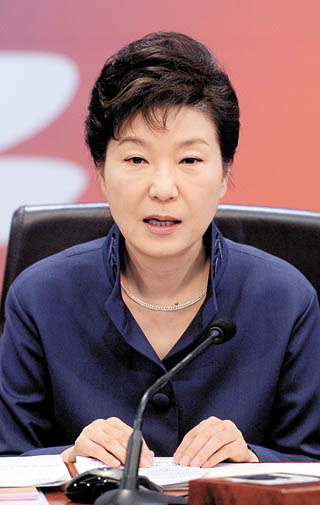 President Park Geun-hye presides over a Cabinet meeting on Tuesday at the Blue House. [NEWSIS]

President Park Geun-hye lashed out at the legislature on Tuesday for stalling the passage of bills important to the economy and urged voters to only vote for “sincere” politicians in April’s general election.

Park issued unusually lengthy opening remarks at a Cabinet meeting, in which she deplored the delayed passage of bills aimed at revitalizing the economy and creating jobs for young people.

In remarks that went on for 23 minutes, Park explained details of the pending bills and their expected effects on the economy and job market. She accused the legislature of holding hostage the well-being of the people.

“I beg for the passage of the bills at every Cabinet meeting,” she said, “but I feel lament because I’m just making an empty echo.”

“Bills that won’t be approved during this legislative session will likely face automatic termination at the end of the 19th National Assembly,” Park said. “If they are terminated automatically because the legislature neglects them, the people will never forgive it.

“Now, it’s the people’s turn to make the National Assembly truly serve their livelihoods and resolve issues directly concerning the public,” Park said. “I appeal to the people that only those who are sincere should be chosen in the future.”

Her remarks came at a sensitive time, as a nominations war flared in the ruling Saenuri Party ahead of the April general election. While Saenuri Chairman Kim Moo-sung has insisted that the party will only field candidates selected in open primaries, speculation grew that the president was pressuring the party to make so-called strategic nominations for her loyalists.

It was not the first time Park urged voters to pass judgement on lawmakers after complaining about their failure to pass bills.

In June, Park said voters must use elections to establish a new political culture after bitterly criticizing Rep. Yoo Seong-min, the then-floor leader of the ruling Saenuri Party, for brokering a deal with the main opposition party to pass contentious legislation.

“The politics of betrayal, in which you violate trust after winning an election, will end up mass-producing the politics of hegemony and factionalism,” Park said. “And the people must judge [such politicians] through elections.”

Yoo was forced to step down as floor leader, and the two-week battle between the ruling party and the Blue House ended with Park’s victory.

On Tuesday, the main opposition New Politics Alliance for Democracy (NPAD) criticized Park for making an overt intervention in the upcoming election and a threat to anyone who disagrees with her.

“Her remark may sound appropriate, but if you look at the whole picture, it was an explicit demand to unseat opposition lawmakers who are against her,” NPAD spokesman Kim Sung-soo said. “It is a threat that all lawmakers who reject her demands for labor market changes and her fake economic bills will have to lose in the general election. When Park ousted Yoo in June, she already triggered a controversy over election intervention by saying that the people should judge people guilty of the politics of betrayal.

“It is unheard of, even under a dictatorship, that the president directly campaigns against the opposition party and threatens ruling party lawmakers who disagree with her,” Kim said. “Park has been sending her ministers and Blue House secretaries one after another to run in the general election without hesitation to overtly influence the races. This is an act of neglecting the people’s livelihoods and abandoning state affairs.”

A group of Park allies are seeking to run in the April general election, particularly in the president’s political hometown of Daegu. The city has 12 electoral districts, and about 10 Park associates, including people who served in her Blue House, already declared their intention to run. The Saenuri Party controls all 12 seats representing Daegu.

Minister of the Interior Chong Jong-sup offered to resign on Sunday amid speculation that he would seek a nomination to become a lawmaker representing Daegu’s Dong A District, currently occupied by Rep. Yoo Sung-kull. In addition to Chong, several former aides from the Park Blue House are seeking to run in Daegu, particularly in districts occupied by lawmakers who are close to Rep. Yoo.

Ruling party officials said Park’s latest appeal to the voters has an underlying meaning. “Park’s message, overall, was targeting both the ruling and opposition lawmakers,” a Saenuri official told the JoongAng Ilbo. “But the expression of ‘sincere people’ appeared to be used to distinguish her loyalists from others.”

Rep. Yoo Sang-hyun, a key political ally of Park, said the political reshuffle in the so-called TK area (Daegu and North Gyeongsang) is key for the Saenuri Party’s victory. The TK nickname dates to when Daegu was transliterated as Taegu and Gyeongsang as Kyongsang.

“We must think strategically when nominating candidates in TK,” Yoo told the JoongAng Ilbo on Sunday. “We must change [the sitting lawmakers] and devise a strategy to nominate candidates who are sure to win. Or else, we may face a backfire in the capital region.”

“Park wants to reaffirm her undeterred political existence in order to prevent her presidency from turning into a lame duck,” said Lee Cheol-hee, director of the Dumun Political Strategy Institute. “A long-term goal is maintaining influence after her term.

“In other words, the Saenuri Party’s nominations for the TK area will be Park asking the TK voters whether they are choosing her or not,” he said.

The April election will be an important test to see if Park can maintain influence after she leaves office.

In Daegu, Park’s popularity is extremely high. In the first week in November, she recorded a 70.5 percent approval rating in Daegu, a Realmeter poll showed.