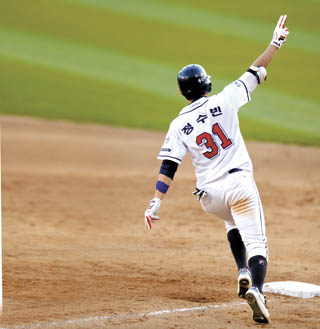 Jung Soo-bin thought his Korean Series was over before it had really started.

In the first game of the championship in Daegu on Oct. 27, the Doosan Bears outfielder’s left hand was hit by a pitch from Samsung Lions’ Park Geun-hong in the sixth inning.

Jung went straight to the hospital, where he was finally able to breathe a sigh of relief. Even though he needed stitches for his left index finger, there were no fractures, and he’d be able to play again.

He skipped Game 2, but by the time the best-of-seven series came to the Bears’ home Jamsil Baseball Stadium in Seoul, he was on fire. 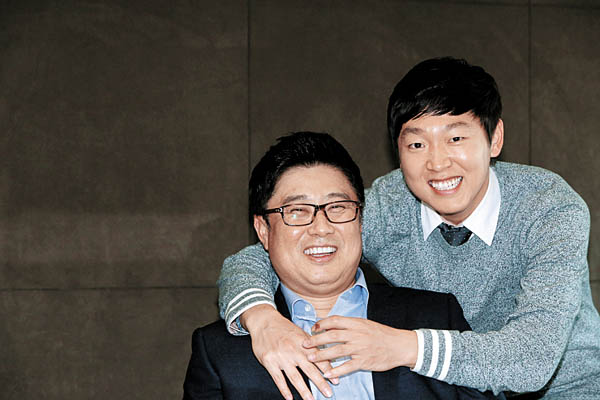 Even though he couldn’t bend his index finger, Jung stepped up as designated hitter.

In Game 5 on Oct. 31, Jung bashed a three-run homer to confirm the Bears first Korean Series title in 14 years. He was named the series MVP, going 8-for-14 with 5 RBIs. In an interview with JoongAng Ilbo on last Tuesday, Jung admitted that playing with his finger injury probably helped him earn points with reporters, who are responsible for the giving the MVP title.

The KBO League is over, but eight Bears are still playing baseball with Korea’s national team in the Premier 12. Jung isn’t among them, but he hopes his new title will help him represent his country one day.

Q. What do you remember about your finger injury during the Korean Series?

A. When my finger was hit by pitch in Game 1, I wasn’t actually feeling pain. Still, I was mad at myself, thinking, “Why should I pick up an injury during this important game?” I didn’t like the feeling that I might miss the whole series. But fortunately, my bone wasn’t broken and I just needed stitches, which made me feel relieved. I rested for Game 2 because there was still pain, but from Game 3, I didn’t feel much pain after wrapping the finger in a bandage. I told my coaches that I want to play as a hitter, because while I wasn’t sure about defensive abilities, I knew I could help the team with my batting.

How did you tell that to manager Kim Tae-hyung?

I didn’t tell him directly. I just participated in batting practice before the game. Then the manager came to me and asked whether my condition is alright. I just said yes. If I wasn’t doing well, he would have approached and told me to rest.

You also played in the 2008 World Junior Baseball Championship with a finger injury.

During the final against the United States, I broke my finger as I slid to second base. I could even see that my finger was bent. But since it was the final and most important game, I requested the trainer keep the injury secret and asked him to wrap the finger so I could keep playing. And I played until the final moment.

But didn’t you feel awkward batting with the injury?

When I hit the ball with the bat, I had to give power, but I couldn’t. So I just focused on connecting with the pitch, which eventually helped me in playing.

How did you deliver the three-run home run in the seventh inning in Game 5?

As we were leading 9-2, I had a feeling that we won the game. Hoping to confirm the victory, I wanted to make it a home run and swung the bat with my full power, and that hit the ball out of the park. Other players asked me whether my finger was alright, but I had no pain at all.

You are known for changing your batting form frequently. Why?

It would be better to perform with one batting form, but it can’t be always good. When I feel it isn’t working, I abandon it right away. This gave me the habit of analyzing other players’ batting form. There’s a reason great batters perform better than other players. I try to imitate the good things that other players do. I usually practice when no one is watching.

How many times have you changed your batting form this year?

About four times. From September, my batting sense was increasing. As my new batting form started to work, I kept it through the Korean Series. My manager told me to stop changing form, but I have to keep changing it.

How was the team atmosphere different from two years ago when the Bears lost to the Lions in the Korean Series?

That previous time, all of us were thinking too much about winning. This year, we didn’t shout about winning. Instead, we said things like, “If we are going to lose, let’s get it over quickly end the game now.” This relieved some of the pressure for players.

What can you say about manager Kim Tae-hyung?

I think he was born to be a manager. He’s a great leader. He knows when to loosen up the squad and when to keep things tight. I personally heard a lot about him before he came as a manager, so I came in thinking it would be nice to play under him. That definitely turned out to be true.

What was your most memorable interaction with manager Kim this season?

I wasn’t performing well in July, and one day, the manager scolded me by saying “Just do it.” That simple phrase woke me up. He scolded me for playing passively. After that, I started to play better.

The team atmosphere in the Bears seems to be really good. Why?

Everybody is friendly. If you follow rules that should be obeyed, whether you are senior or young player, you can get along very well. Captain Oh Jae-won and veteran Hong Sung-heon are leading the team well. Oh has a fighting spirit and can be pretty passionate. Sometimes, that can be misunderstood by people, but us players think his behavior is natural for our team.

Korean Series MVP is a big award, but do you have any others awards in mind?

I want to get a Golden Glove. I think this year will be difficult for me to win, so I have to try in next year. I really want to have it.

Your teammate and friend Hur Kyoung-min was selected to the national team right after the Korean Series. Do you envy him?

When are you going to serve your military service?

The team also needs me next year and I have my position as well. As my career is going well, I don’t think I should abruptly cut things off.