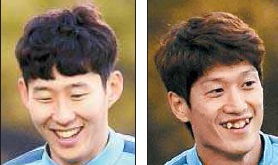 Tottenham Hotspur forward Son Heung-min is back to lead the national team against Myanmar in the squad’s second round Asian qualifiers for the 2018 FIFA World Cup.

Korea, ranked 48th in FIFA rankings, tops Group G with four straight victories. It hosts world No. 161 Myanmar before playing Laos in Vientiane on Nov. 17 to wrap up its international match schedule for 2015.

Under coach Uli Stielike, Korea has collected 14 wins, three draws and one loss in 2015. Defeating Myanmar and Laos will see the Taegeuk Warriors wrapping up this year having won 80 percent of their matches.

Even though the two Southeast Asian opponents aren’t considered a threat to Korea, Stielike has called up Europe-based players including Son, who missed the national team action last month due to injury.

The 23-year-old picked up a foot injury in late September during an EPL match against Manchester City. It later turned out to be plantar fasciitis, also known as jogger’s heel.

But the former Bayer Leverkusen and Hamburger SV forward returned for Tottenham last Thursday in his club’s Europa League match against Anderlecht, and also played in an EPL match against Arsenal on Sunday as a substitute.

“This was the second severe injury in my career,” Son said at the national team training on Tuesday. “I was stressed because I had to receive treatment in the medical room, while other players were playing. But now that I can start training, I’m happy.”

Son said that the London-based club didn’t want him to join the national team because it was concerned about his recent injury, but he insisted on playing for his country.

“My club couldn’t say no,” he said. “Although I have to gear up my stamina, it won’t be a big problem.”

The match against Myanmar is Korea’s last international match played at home this year. For this reason, Son said he wants to go all-out for his home fans.

The Gangwon native said that if he is given a chance to start against Myanmar, he will “run until I get a cramp in the leg.”

Although penetrating and running over Myanmar’s defenders will not be more difficult than doing the same against European teams, Son said scoring is different issue.

“I think people have started to expect that I score in every match,” said Son, who has 14 goals in 45 matches for Korea. “Although the opponent is weaker than us, this kind of match is more difficult, and getting the first goal is really important.”

Another player returning to the national team is Crystal Palace’s Lee Chung-yong, who also missed matches in October due to ankle injury. The 27-year-old landed in Korea on Monday after taking the same flight as Son.

Son and Lee have played together for six matches under Stielike, during which team collected four wins and two losses. In most the recent match against Laos in September, the two EPL players were pivotal to deliver Korea’s 8-0 victory.

Swansea City midfielder Ki Sung-yueng said he isn’t worried about Son and Lee despite their injuries.

“The two players have always been showing good performance in the national team and they are the most trustworthy players,” said the 26-year-old who is also team captain. “They will produce good results if they play like usual.”

Ki, who is the most experienced player in the squad with 78 matches, said it’s his role as captain to make players to feel comfortable and help the team deliver consistent performances regardless of their opponents.

The former Celtic and Sunderland midfielder is one of the eight Europe-based players in the squad, and Ki said that the time difference and long travel will not bother Korean players in the European league.

“All players in Europe travel a lot and there is no way that we can completely ignore [this tight schedule],” he said. “But since there are going to be no international matches until March, there will be no big problem.”

This will probably be the last time that the Europe-based players can visit home this year since the European football league continues through the winter. This is the reason why all of them are hoping to make best impression in front of the home fans before the year ends.

“Since the match against Myanmar is the final match at home, we will focus more than any other time,” Ki said. “We will not only get good results, but we will also show good performances.”