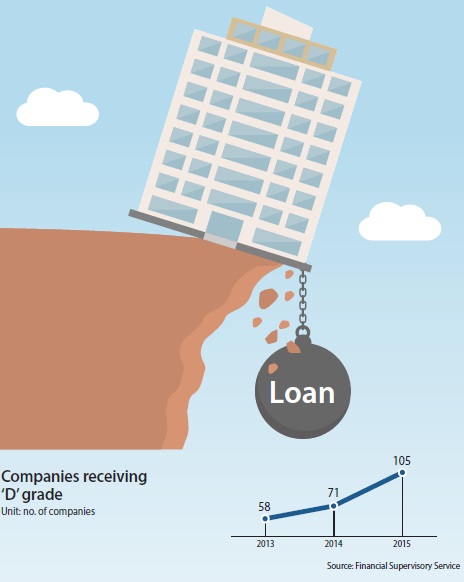 The government identified 175 small and medium-size enterprises (SME) as needing restructuring, part of efforts to prune the country’s debt-ridden companies.

The number is the largest since 2009, when authorities ordered more than 500 SMEs to restructure in the aftermath of the 2008 global financial crisis, and marks an increase of nearly 50 percent year on year.

The announcement came after the financial sector was rattled by the enormous losses reported by Daewoo Shipbuilding & Marine Engineering, the world’s second-largest shipbuilding company, earlier this month.

Following public criticism that the government didn’t do enough to prevent the losses, the nation’s financial authorities have vowed to be more aggressive in forcing companies to restructure.

The Financial Supervisory Service (FSS), a top regulator in the banking sector, announced Wednesday the outcome of its regular inspection of a total of 17,594 SMEs, finding that 175 needed restructuring or to declare bankruptcy.

“We investigated any SME that received a loan of less than 50 billion won [$43 million] at all banks in total, or more than 5 billion won at one bank,” said an FSS official by phone. “Inspections of conglomerates will be carried out in November or December.”

During the four-month inspection between July and October and led by the local banks acting as creditors, bankers sorted out companies with poor financial statements and narrowed down the final list through a specific assessment of each firm, based on cash flow shortfalls and times interest earned ratio, a measure of their ability to pay back their debts, among others.

Out of the assessment’s four-ranking system from A to D, the 175 companies ranked C or D. Seventy were rated C, and the remaining 105 were marked D.

The C group will receive additional funding immediately and carry out a workout program or restructuring to revive them, the FSS said.

In Korea, applying for court receivership is a last resort, as it is considered a public admission of a business’s failure. Once done, the company’s credit rating usually crashes, and its internal information and data is revealed.

“The owner of an insolvent company brought a copy of registration of their property in Mount Jiri as collateral and begged the banks to not abandon his company, pledging they would make efforts to revive,” said Jo Seong-mok, the senior FSS official in charge of the restructuring classification, at a briefing on Wednesday. “Owners do not want to close their businesses, and neither do the banks.

“But if banks continue to offer funds for those companies with no chance of reviving, it will only prompt more bad debts at banks,” he said. “Someone must jump in the middle of the situation and stop it.”

More than half of the companies were in the manufacturing industry (105), rising 29 from a year earlier. Among them, the makers of electronics components accounted for the most (19), followed by machinery (14) and automobiles (12).

Nine shipping companies were also added, five more than in 2014.

A total of 2.2 trillion won in loans have been issued to the 175 companies, the FSS said. With the restructuring announcement, local banks will be required to increase their reserves to cover bad debts by about 450 billion won.

As a result, the BIS ratio of the banks is expected to fall 0.03 percentage points on average to 14.06 percent, which the FSS says won’t significantly impact their soundness.