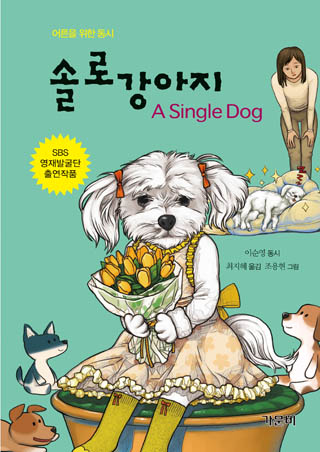 The modified edition of “A Single Dog” excludes the most controversial poem. [KIM BA-DA]

The collection of poetry called “A Single Dog,” which contained a controversial poem in which an elementary school student seems to suggest her mother should be boiled and eaten for sending her to after-school classes, is back in local bookstores since Friday after the publisher decided to pull it from the shelves back in May.

The 10-year-old author Lee Soon-young’s graphic poem, “The Day I Hate Going to the Academy,” has been removed from the updated edition. However, the title of the poem has been printed at the top of a blank page so that the young writer can remember how her creative mind once sparked controversy in Korea’s literary world and be prompted to think more about what makes a good poem, the writer’s mother told the Korea JoongAng Daily.

“I wanted her to know that it became a controversy not because her writing has any flaws but because there were debates arising,” said Lee’s mother, Kim Ba-da, who is also a poet. “And that blank page will resonate and deliver all the words we couldn’t express in the moment.”

The young poet and her parents originally said they didn’t want to exclude that particular poem when it was first published as part of the book, even when the publisher tried to take the poem out. They wanted the whole package, but decided to take a “painful sacrifice” for the bigger cause: allowing the rest of Lee’s works to be available to the public. The new edition also includes nine new poems.

“Soon-young was heartbroken to see her writing crushed into pieces,” Kim recalls, explaining how she decided to make the modified edition. “She is a young kid and happy to see her book out again.”

The modified edition was published by Gamoonbee Publishing Company, which the family originally worked with for the first edition released in March. Back then, not only the words but also an illustration of a girl eating a heart while covered in blood were featured, leading many readers and Internet commentators to debate ethical questions about how to treat literary works of this nature by a young writer.

After the publishing company decided to remove all available copies of the book in May, literary expert Ban Kyoung-hwan collected news articles on the controversy and published the collection in a source book called “Korea Town” in September.